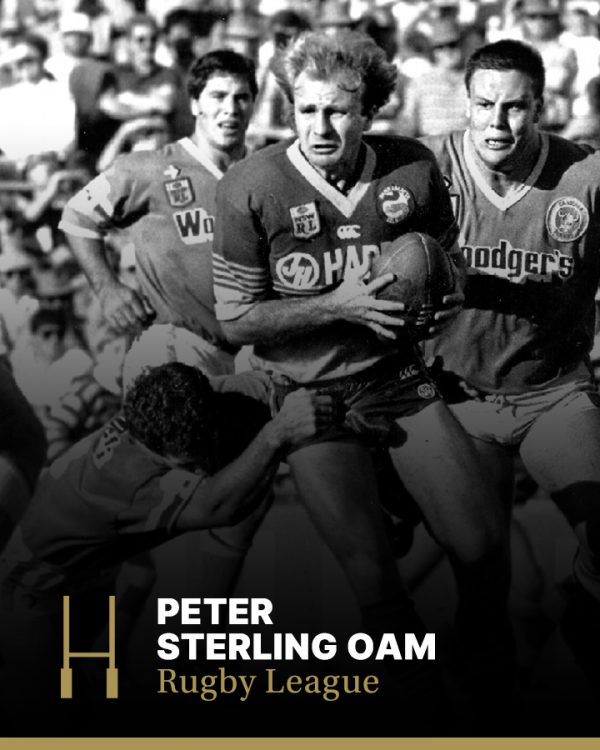 Peter began playing rugby league in Raymond Terrace, just north of Newcastle in New South Wales, before moving on to Wagga Wagga. As a schoolboy, Peter showed the promise that would eventually make him a Test super-star. He is still talked about today as being the greatest halfback that ever played the game.

It was at Wagga Wagga that Peter was spotted by Parramatta coach Terry Fearnley and invited to trial with the Eels. The move to Sydney took him to Fairfield Patrician Brothers, where in 1978, then playing as five eighth, turned in a brilliant performance to steer them to a 19-3 victory over Padua in the final of the Amco Shield (the televised school’s championship) – the start of one of the most celebrated careers in rugby league history. He was also named as the shield’s player of the year. Such was Sterlings ability that he played a game for Parramatta’s first-grade side that year, while still at school.

He was nursed along in the Eel’s lower grade sides the following year. Then, in 1980, he burst upon the scene, establishing himself as the club’s number one halfback and winning the Tooth Cup super-star award.

Sterling played his entire career (227 first-grade games) with Parramatta, playing a pivotal role in the 1981, 1982, 1983 and 1986 premierships and winning every team and personal honour there was on offer. He enjoyed undefeated Kangaroo Tours in 1982 and 1986 and his career includes 19 Tests against Great Britain and New Zealand.

His form for Parramatta as it advanced to a second premiership won him a spot in the 1982 Kangaroo touring squad. Once in Britain he relished the conditions and displaced Steve Mortimer from the test halfback spot. Sterling was never to be challenged until he finally quit the representative scene after the 1988 series against the touring Great Britain side.

In the northern hemisphere he narrowly missed out on similar success. He played several seasons with Hull in England, part of the team that went down 28-24 to Wigan in the 1985 Challenge Cup Final at Wembley Stadium.

Sterling’s finest year was undoubtedly 1987, when his play laid the foundations for success in all individual awards. Even though he had quit international football, his form continued to be outstanding. The respected English magazine ‘Open Rugby’ also named him as the best halfback in the world in its annual ratings at the end of 1990, even though he wasn’t playing Test football.

After several shoulder reconstructions, he was forced into retirement after a crunching tackle from Western Suburb’s David Gillespie at Parramatta Stadium in 1992.

‘Sterlo’ was a short but tough halfback adept at kicking and passing, with instinctive ability to read the play. His brilliant skills, likeable personality and long fair hair maid him one of the code’s most popular players.

Peter is a co-host of the popular ‘Footy Show’, which airs on the Nine Network during the rugby league season and remains one of the most popular players of all time, even ten years after his retirement.