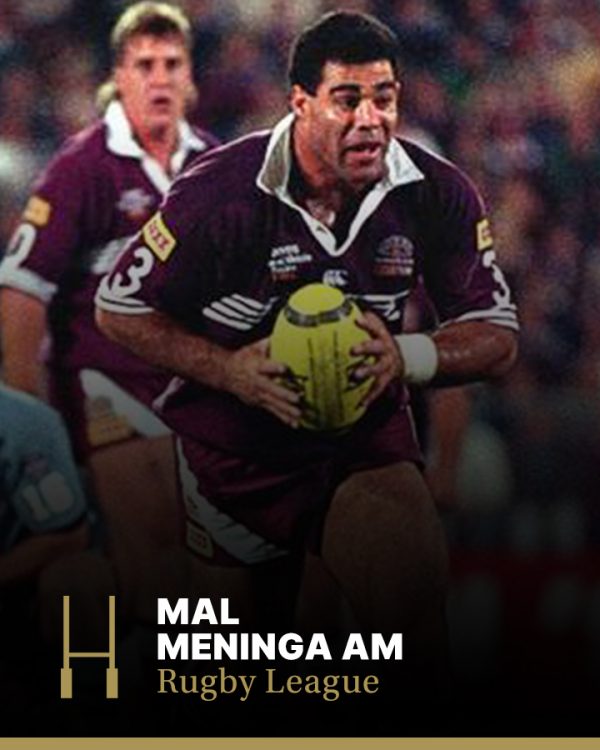 Powerfully built and stoic through countless injuries and setbacks, standing 185cms and weighing 105kgs, Mal Meninga became the first player in the history of the game to be a member of four Kangaroo tours of Great Britain and France. Born in Bundaberg, he was taught the game by his father, and took to it with avidity, dominating well into the 1990s.

Meninga first represented Queensland in the Under 18 competition in 1978, and over the next 16 years compiled the greatest number of records by any Rugby League player to the time of his retirement in 1994. With over 400 First Grade matches to his credit, and 32 State of Origin caps, Meninga still looms large as one of the leading figures of Rugby League.

On the international stage, Meninga played 73 games in all for Australia, including a record 45 Test Matches. He captained Australia from 1990 to 1994, including two Kangaroo tours in his time at the helm.

He played in NSW Rugby League premiership winning teams with Brisbane Souths in 1985 and Canberra Raiders in 1989, 1990 and 1994, as captain on all three occasions. Upon his retirement in 1994, Meninga eventually made his way into the coaching scene, leading the Canberra Raiders before taking charge of Queensland’s State of Origin side.

Meninga was named as a Member of the Order of Australia for his services to Rugby League Football in the 1994 Australia Day honours list, and was recognised as the Australian Achiever of the Year in 1995.