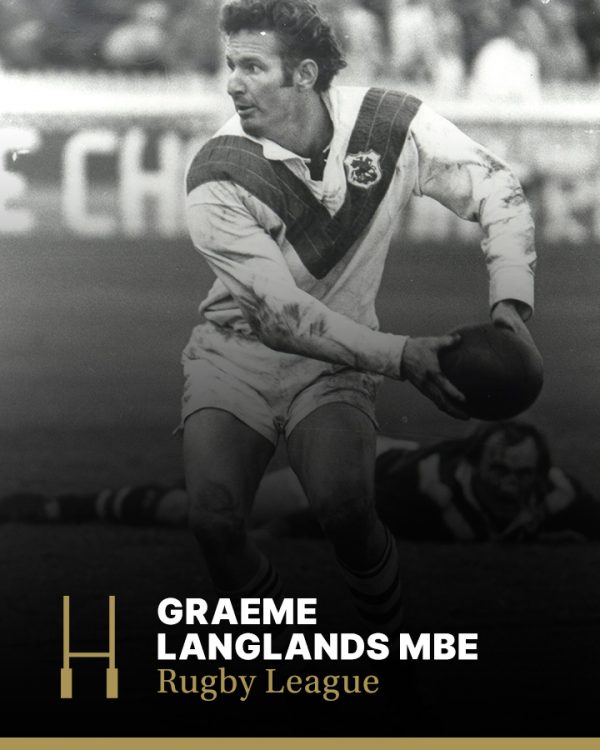 Born in Wollongong, New South Wales, Graeme ‘Changa’ Langlands represented Combined NSW High Schools from 1955 to 1957 and was playing 1st grade with the Wollongong Club in the Illawarra competition at age 18. He was selected in Country Firsts in 1962 and that same year made the first of 33 interstate matches for NSW over 14 seasons.

Langlands added new firepower to the aging Dragons champion line up when he joined St George in 1963. It was largely due to his class that the club remained competitive up untill 1975. He played in four St George premiership sides, including 1966 where he kicked seven goals to beat Balmain. He was the competition’s leading point scorer in 1971 and 1973 and was the Dragons top point scorer in first-grade for 10 seasons between 1963 and 1975.

Fundamentally taciturn and introspective he was not given to post match speeches as captain but demonstrated an uncompromising leadership style via his will-to-win and a preparedness to be ruthless if required.

He was a graceful, balanced runner of the ball, long-striding and fast. His trademark sidestep off either foot became legendary in the Australian game. He would almost undetectably feint one way then make a 2m leap the other way at full speed taking him diagonally through a gap and into the clear.

Langlands made his Test debut against New Zealand in 1963. The depth of the Australian fullback line up with Ken Thornett then Les Johns as incumbents meant that Langlands spent the first four years of his Test career at centre. He excelled there and in the Ashes deciding 2nd Test at Swinton on the 1963/64 tour he scored an Anglo-Australian record of 20 individual points in the historic 50-12 “Swinton Massacre”. Langlands played international football for Australia every season for 13 seasons in 34 Tests, for a total of 189 points (17 tries and 69 goals).

He first captained Australia for the 1970 Ashes series and thereafter barring injury for the next five years. He was captain-coach for the 1973 Kangaroo Tour and the 1974 Test Series at home against Great Britain. In the deciding 3rd game in 1974 Langlands played a magnificent match to win the Ashes and was carried aloft from the field with the huge SCG crowd chanting his name. He was the last Kangaroo selected in the dual captain-coach role.

Langland’s World Cup career encompassed three tournaments, two of which brought him victors’ laurels. His debut in World Cup competition saw him in the centre as Australia downed Great Britain 25-10 in Sydney on May 25, 1968. A week later he was in the team that beat New Zealand 31-12 in Brisbane, and on June 10, he was running around the SCG with the World Cup after defeating France 20-2 in the final.

In 1970 Langlands was ruled out of the tournament in England with a broken hand but in 1972 he captained Australia during the series in France, where Australia was runners-up. He played throughout the tournament at full-back, landing four goals against Britain at Perpignan and leading his team to victories over New Zealand (9-5) in Paris, and France (31-9) in Toulouse.

In 1985, Rugby League Week nominated an Australian ‘Masters’ side picking its 13 best players since 1970. Amongst them were eight former Australian captains. Dressing in their Australian strip for a commemorative photo at the Sydney Cricket Ground Langlands was late to take his seat. He arrived to find one spot left -front row, centre seat. These legendary players had selected him as their captain.

In 1999 he became the fifth selected post-war “Immortal” of the Australian game with Churchill, Raper, Gasnier and Fulton. He became a Member of the Order of the British Empire (MBE) for his service to rugby league in Australia.