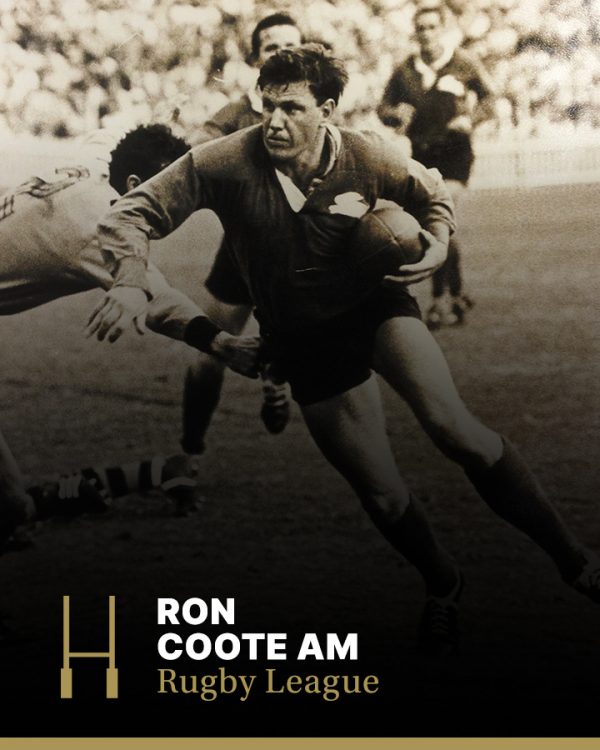 Ron Coote AM was inducted into the Sport Australia Hall of Fame in 2013 as an Athlete Member for his contribution to the sport of rugby league.

Six Premierships, nine Grand Finals, 23 Test and World Cup caps and 259 League games are surely enough to earn Ron Coote his place among Australia’s sports immortals. He is widely regarded as one of the great lock forwards of all time, but many former Rugby players and officials will remember him equally fondly for his efforts in setting up the Men of League organization which helps players, referees and officials when their playing days are over. He was inducted into Rugby League’s Hall of Fame in 2005.

Born in Kingsford NSW (Oct 25, 1944). His father Jack Coote had been a forward with Easts and young Ron quickly made a name for himself with the South Sydney juniors. He earned promotion to the senior side in 1964 and then played 151 games with the Rabbitohs before he left to join Eastern Suburbs at the end of the ‘71 season. There he played a further108 games before an arm injury forced him into retirement in 1978.

The tall lock forward set new benchmarks for defensive play and was a cornerstone of Australian sides in the sixties and seventies. He represented Australia in 13 Tests and 10 World Cup matches and was national Captain for three of his world Cup appearances in 1970.

He was widely known as the Prince of Locks That was a polite deference to the legendary John Raper who had been dubbed King of Locks, but few would doubt that at his peak, Ron Coote dominated the position over all his contemporaries.

A successful businessman with a chain of fast food franchises, Ron Coote continued to make a contribution to game after retiring as a player. He served in the NSW Rugby League judiciary, but also created the Men of League program to support players, officials and referees post retirement.

Men of League, founded in 2000, provides assistance and grants for medical operations and also mentoring and advice for players leaving the game. It also helps promote rugby league in regional areas.

In 2008 Ron Coote was inducted into the Australian Rugby League’s Hall of Fame in 2005 and named in NSW Rugby League’s Team of the Century the same year.

He was named in South Sydney’s “Dream Team” selected in 2004 and has been included in Eastern Suburbs all-time-great teams. He is a Life Member of the Sydney Cricket Ground and a plaque in their Walk of Honour celebrates his career.

He is commemorated annually with the presentation of the Ron Coote Cup, fought for by the two sides to who he devoted his playing career, South Sydney and Eastern suburbs.