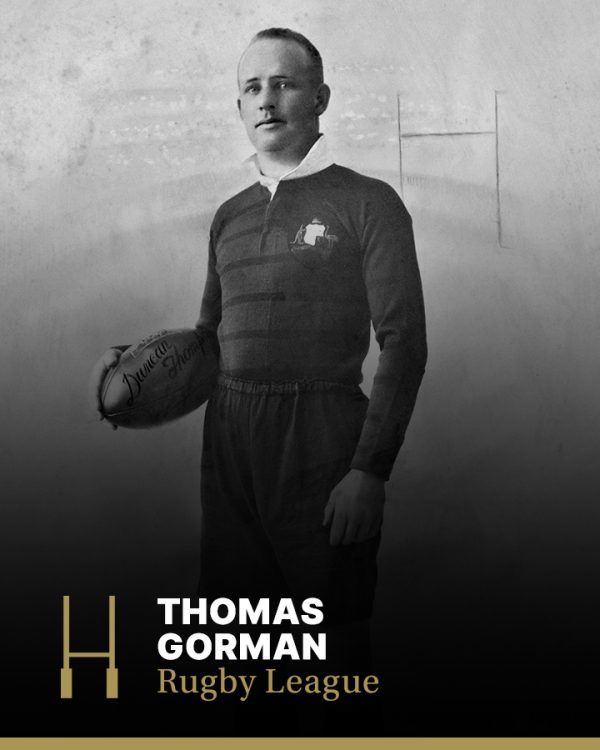 Tom Gorman began playing representative rugby league for Toowoomba in 1920. The Toowoomba team, known as “the Galloping Clydesdales”, was pre-eminent in Queensland football, even defeating England in 1924. Gorman transferred to Brisbane in 1926, where he played for Brothers. He was an automatic selection for the Queensland side from 1921 when he made his state debut, to 1930, playing a total of 27 matches. He was well known as an inspiring captain, leading Queensland in 1927 and again in 1930.

He represented Australia from 1924 to 1930, playing 22 matches on tour (including four Tests), and was the first Queenslander to captain an Australian Kangaroos tour of England, in 1929/30, including the spectacular Australian victory at Craven Park, Hull. He often played with injury to give his teammates a rest. Gorman’s finest match was regarded as his third Test in 1924 against Great Britain in which he figured in three tries in Australia’s victory.

A very unselfish centre three-quarter, Gorman was fast, elusive, and a fine handler in attack; he was sure, though not punishing, in defence, and had a great sense of positional play.

In retirement he took a leading role in the evolution of the game in Queensland as an administrator. Gorman pushed for increased points for a try from three to four – a move later accepted by the Australian Rugby League.