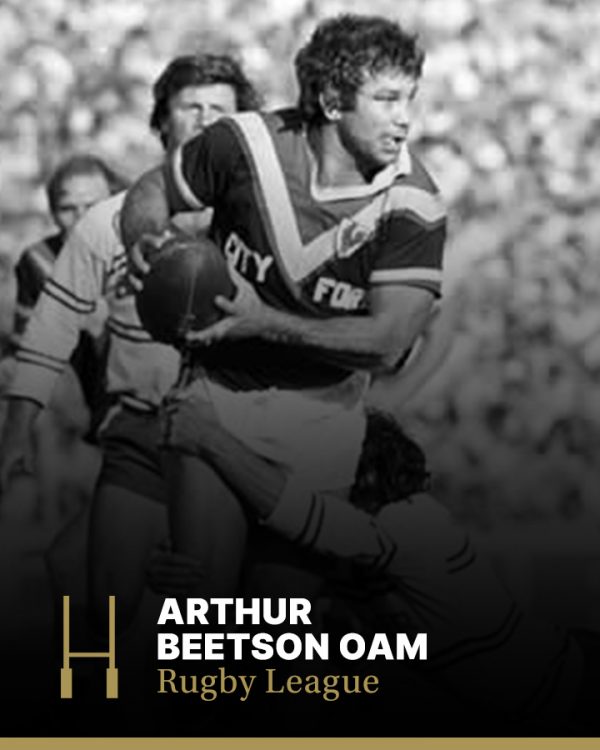 Born in Roma, Queensland, in 1945, Arthur ‘Artie’ Beetson started his career at local level as a centre. However, by the time he was playing with Brisbane side Redcliffe, he was in the forward line, and it was there that he became a member of that team’s 1965 premiership win.

Making the move to play for Sydney powerhouse, Balmain, in 1966, his commitment to training was questioned in some quarters, but his talent was undeniable and earned him a place in Australia’s third and deciding Test against Great Britain in 1966. While his fitness had also been queried, it only took a first half burst from Beetson, including two tries, to completely rout the opposition.

With injury ruling him out of the 1967 Kangaroos tour, Beetson bounced back to play a major role in Australia’s 1968 World Cup victory. At club level, suspension denied him the chance to be part of Balmain’s premiership victory in 1969. The next year, 1970, was one of mixed fortunes, and harsh decision making. Beetson played in all three Tests against Great Britain in Australia, but was overlooked for the World Cup, held in England.

At the end of 1970, looking to rejuvenate his career, Beetson left Balmain to join Easts (Roosters). With a new beginning, and thanks to the influence of coach Don Furner, it was a fitter and more committed Beetson who returned to the Australian team for the 1972 World Cup, and toured with the Kangaroos in 1973. His skill for off-loading seemingly impossible passes became infamous, and his maturity and dedication was unquestionable. He captained Australia in France in 1973, and against Great Britain in the second Test of 1974. He was also an integral part of consecutive premierships for Easts in 1974 and 1975, and cemented his international status when he led Australia to World Cup victory in 1975 and 1977.

Left out of the Test team to play New Zealand in 1977, Beetson was reinstated after major controversy regarding interstate politics in the game, but ultimately decided to stand down. He captain-coached Easts in 1977 and 1978, then joined Parramatta for 1979 and 1980. Despite his playing time being curtailed by injury, he was chosen from the reserves to captain Queensland in the first State of Origin match, played against New South Wales in 1980. Fittingly, he led the Queenslanders to a 20-10 victory at Lang Park.

Awarded the Medal of the Order of Australia (OAM) in 1987 for his services to rugby league, Beetson retains an active involvement to this day. A recruitment officer for the Roosters, he is a state selector for the Queensland team, and Australian Test selector. Beetson was recognised as rugby league’s seventh ‘Immortal’ in September 2003.