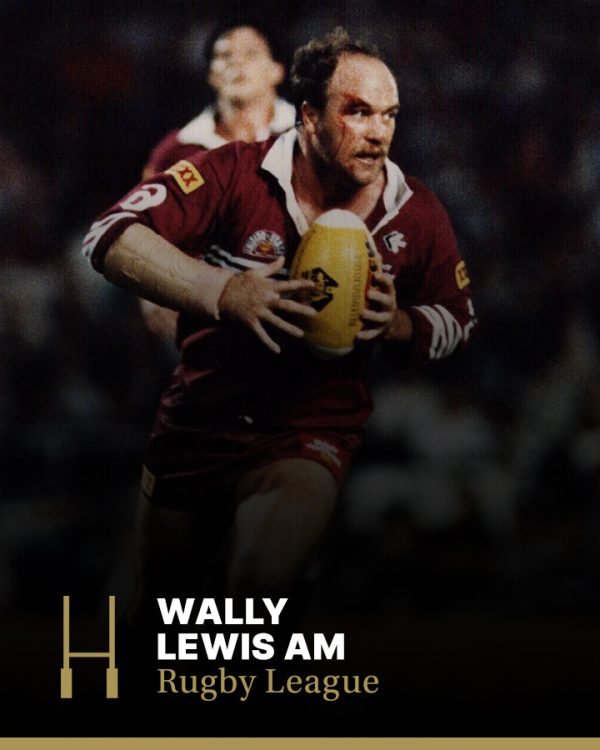 Wally Lewis AM was inducted into the Sport Australia Hall of Fame in 1987 as an Athlete Member for his contribution to the sport of Rugby League and was elevated to Legend of Australian Sport in 2016.

In the early 1980s there were those who claimed Lewis was the best player the game had ever seen. Others, particularly the New South Wales press, portrayed him as a controversial figure that should be cut down to size.

A decade later Wally Lewis had them all in agreement after a career of countless highlights for his clubs, Queensland and Australia.

Wally Lewis first came to wider attention as a member of the famed Australian schoolboys rugby union side that toured Europe, Britain and Japan undefeated in 1977/78.

In April 1978 Lewis made his first grade league debut for Valleys when he came on from the bench at half-time in an Amco Cup tie against Illawarra. Playing lock-forward he remained in first grade throughout the season and earned the Brisbane Colt of the Year Award as Valleys made the grand final.

He made his debut for Queensland in the final interstate match of 1979 against NSW when chosen as a replacement. On the club scene he led Valleys to a 26-0 grand final win over the Wayne Bennett coached Souths in front of a capacity crowd of 35,000 fans at Lang Park -now known as Suncorp Stadium.

Queensland finally selected Lewis in their starting side at lock forward in 1980 for the inaugural State of Origin match -he was the only man in the pack who hadn’t played for Australia. But coach John McDonald put it plainly: “He’ll be the best player we’ve had…ever!” Lewis didn’t have a significant impact in that first Origin game, but he watched and learned much from Arthur Beetson on and off the field. It would pay dividends in the future.

In 1981, Beetson took over as Queensland coach and made a major positional switch – naming Lewis at five-eighth. It worked immediately, with Lewis making his Test debut in two matches against a disappointing French side. He was the only Queenslander named in the Australian side. After the Tests he was appointed captain of Queensland for the one-off Origin game. Lewis then produced his finest moment in his career to that point when he turned a 15-0 deficit into a 22-15 win for the Maroons on the back of a powerful running game and smart passing.

In the deciding game of the 1982 Origin series Lewis again played NSW out of the match, but this time he did it with huge 50m kicks that frustrated the Blues. He also introduced for the first time his long passing game that completely mesmerised NSW and sent tacticians scurrying to devise a means to defend against this new weapon.

Lewis was selected for the 1982 Tests against New Zealand before being included in the Kangaroos as vice-captain for the end of season tour to England and France. However, he was overlooked for the starting side in all three Tests against Great Britain – he came on from the reserves bench in the final two Tests at half-time -and at Wigan in the 2nd Test, he produced arguably the most incredible pass yet seen in international rugby league. Australia was down to 12 men after having a player sent from the field and narrowly ahead on the scoreboard as Lewis held the ball inside enemy territory. Great Britain’s defensive line had the situation well in hand and was converging on Lewis and his attackers. However, in a blink, Lewis threw the ball 30m across the field to hit a rampaging Mal Meninga on the chest who crashed over to score a try. Even his team mates shook their heads in disbelief at what they had witnessed. In one play Lewis had forever changed the way rugby league was to be played.

For the 1983 series against New Zealand, Lewis was reinstated as Test five-eighth, a position he would hold until 1991 apart from injury. In 1984 he was granted the Test captaincy, which continued on the undefeated 1986 Kangaroo tour and the 1988 World Cup. He was denied a third Kangaroo tour (1990) after being ruled out with injury in doubtful circumstances.
In a busy off-season at the end of 1983, Lewis led Queensland on a short UK tour before returning to England a month later to take up a 10 match stint with Wakefield Trinity.

Back home in 1984 Queensland continued their domination of Origin under Lewis’ on-field leadership.

After leading Australia to a 3-0 series win over Britain at the SCG, Wally proudly lifted the Ashes trophy. A few weeks later he was back in Sydney to lead Brisbane in a KB Cup Final win over Easts -a mid-week elimination competition.

Lewis continued his domination in State of Origin throughout the rest of his Queensland career which ended in shock circumstances in 1991 -he and his wife Jackie discovered their daughter Jamie-Lee was profoundly deaf the morning of the series deciding final game -and he made a decision to retire from the representative scene – declaring there were many things more important in life than football.

Amongst the countless examples of his match-winning plays, were his performance in Origin 2 of 1989 in Sydney, where the scores were locked at 12-all with the Maroons desperately in trouble – they finished the match with 12 men left on the field after being ravaged by injury and sinking fast.

From 40m out Lewis took the ball and made an angled run at the corner. Lewis beat the tackles of Chris Mortimer and Laurie Daley before carrying Test fullback Garry Jack over the line. In a single play, Lewis took Queensland to the lead, inspired his team, silenced the crowd and stunned the Blues. It was, as they say, “pure Lewis”.
Origin was Lewis’ domain – he missed just two games for the Maroons in 12 seasons and won eight man of the match awards.

Lewis retired in 1992 after spending his two final seasons at the Gold Coast. Wally will always be remembered for his ability to control a football game, conjure tries from the inconceivable, inspire his team mates, frustrate the opposition, infuriate opposing fans, bullish tackling, classic cover defence and a passing game that redefined the sport.

In 1987 Wally was made a Member of the Order of Australia for his services to rugby league.