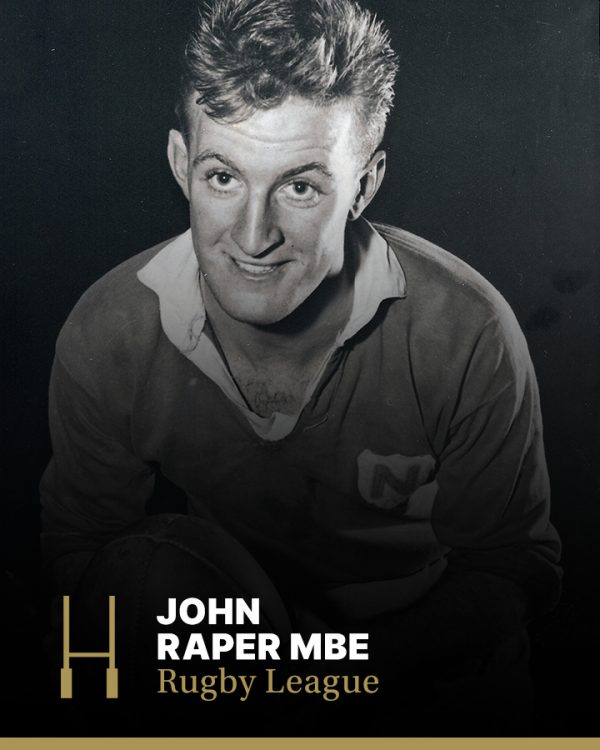 John Raper MBE was inducted into the Sport Australia Hall of Fame in 1985 as an Athlete Member for his contribution to the sport of rugby league and was elevated to Legend of Australian Sport in 2010.

Raper, nicknamed ‘Chook’, was regarded as the greatest lock forward to ever play rugby league and some experts rated him as the best player ever. He had a reputation as the game’s finest cover-defender with a superb tackling technique, while he also possessed a slick running game and brilliant passing skills. He had the rare qualities of being creative, clever and one of the greatest cover defenders the game has seen. He was affectionately known as one of the game’s greatest characters.

He began his league career with Newtown in 1956 and was a member of the Bluebags’ Presidents Cup-winning team the same year. He was promoted to grade after the competition concluded and began a career unparalleled in rugby league history. Quickly winning promotion through the lower grades, Raper made his first-grade debut at the start of the 1957 season and never played in a lower grade thereafter. He played in 37 first grade games and scored 10 tries (30 points) for Newtown.

He made his representative debut in 1958 in a match for Sydney Colts against Great Britain, the first of many confrontations with the Englishmen. Raper switched to the St George club in 1959 and added another dimension to what was already a champion side – he played superbly in that season and represented NSW, Australia in three Tests against NZ, making his Test debut at five-eighth, and toured with the Kangaroos in a year in which St George won the premiership while going through the season undefeated.

Raper went on to play 185 matches in 11 seasons for St George winning eight Premierships, scoring 47 tries and four goals (149 points), giving him a tally of 222 first-grade matches throughout his career, as well as 24 matches for New South Wales between 1959 and 1970, scoring 5 tries (15 points), and 33 Test matches for Australia between 1959 and 1968, scoring 9 tries (27 points). His first Test was against New Zealand in 1959 and his last was against France in 1967 on the victorious Kangaroo tour. He is one of a few players from that era to have played official league Tests against South Africa, playing in both matches in Australia in 1963. He also took part in the 1960 and 1968 World Cup competitions, captaining Australia to victory in the latter tournament.

In 1970 he left St George and completed his playing career in the Newcastle competition with Western Suburbs and Kurri Kurri, before coaching stints with Cronulla-Sutherland and Newtown.

He was the winner of the Harry Sunderland Medal (1964), Clive Churchill Medal (1966) and he was named one of the four original Immortals in 1981

Once his playing career finished, Raper served with distinction as a city, state and national selector and continued to contribute in many ways to rugby league.

He was made a Member of the Order of the British Empire (MBE) for services to rugby league in .

Inspiration: ” Understanding the dedication necessary for fitness and that dedication will be an ally.”