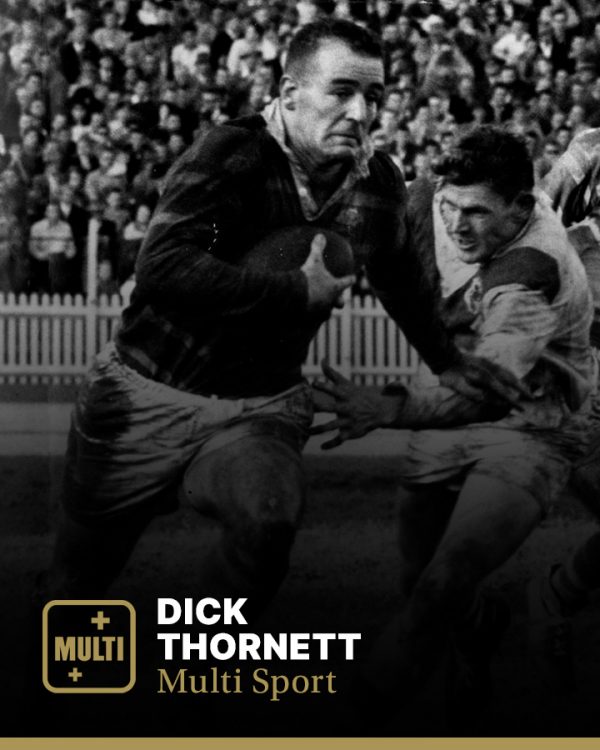 Dick Thornett was inducted into the Sport Australia Hall of Fame in 1999 as an Athlete Member for his contribution to multiple sports.

Thornett was one of the select band of Australian triple internationals and represented his country at the highest level in rugby union and rugby league.

Thornett played water polo for Bronte and New South Wales in 1959 and 1960 and was chosen in the 1960 Olympic team for Rome. As soon as he handled a water polo ball he was an instant success and possessed a shot so powerful that it made most goalkeepers shudder. At the Olympic Games he gained the respect of seasoned internationals by his vigorous play and scoring potential. He played only another two years after 1960 because his rugby career blossomed. He had enormous ability and could have been one of the greats.

Although they were all members of one of Australia’s outstanding football families, brothers Dick, Ken, and John Thornett never managed to all play together. Dick played eleven rugby union Tests with his brother John against New Zealand, South Africa, Fiji and France in 1961/62, before switching to rugby league in 1963.

He joined his other brother Ken at Parramatta as a front-rower, going on to play 168 games for the club. He make his Kangaroo debut in 1963 against South Africa and played 14 Test matches for Australia, against Great Britain, France and New Zealand including the triumphant tour with the Kangaroos to Great Britain and France in 1963/64.

Thornett and Ken were the first set of brothers to play in the same Kangaroos side since the Farnsworth brothers in 1912 when they ran out in three Test matches on the 1963/64 tour. They played again in three matches of the 1968 World Cup.

Thornett, at 104kgs, was a feared runner with the ball and was renowned for his strength in rucking and mauling. He was always an extremely mobile forward, a clever ball handler, and prodigious punt kicker.