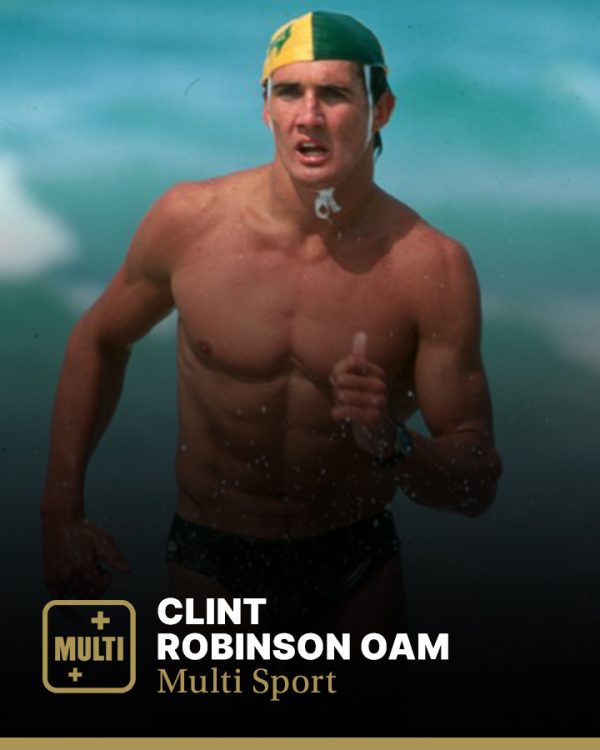 Clint Robinson OAM was inducted into the Sport Australia Hall of Fame in 2013 as an Athlete Member for his contribution to multiple sports: swimming, canoe/kayak and surf life saving.

With 36 national titles Robinson is the most successful competitor in Australian Surf Life Saving History.

Yet even that remarkable achievement tends to be overshadowed by his feats in the canoe and kayak at five Olympics and three World Championships where he captured Olympic gold (’92), silver (2004) and bronze (‘92) and mounted the World Championship podium five times between 1991 and ’95 to claim one gold, two silver and a bronze medal.

Born on July 27, 1992, in Brisbane, Clint David Robinson grew up at Nambour on the Sunshine Coast. A promising rugby league player as a schoolboy, his passion was surf lifesaving and in 1987 he won the Cadet Malibu Board Race at the National Surf Lifesaving Championships. That led to an invitation to join the Australian Olympic Kayak squad in 1988 -and ultimately to representing Australia at five Olympic games, the last at Beijing in 2008 at the age of 36.

While training with the Olympic squad he continued to compete in beach events, notably the Uncle Toby’s Iron Man series, where the rigorous Olympic kayak training helped him dominate the ski and board events but limited the time available for running and swimming training.

Robinson was inducted into the Australian Institute of Sport’s Best of the Best in 2001 and into Queensland Sport Hall of Fame 2009.

Among competing in various water sports, Robinson was still leading the way in surf lifesaving events and was part of Australia’s national team in 1993, ‘95 and ‘99. In 1999 he took out his 24th national title to overtake Trevor Hendy as the sport’s most successful competitor ever. By 2008 he had extended that figure to a remarkable 36 national titles.