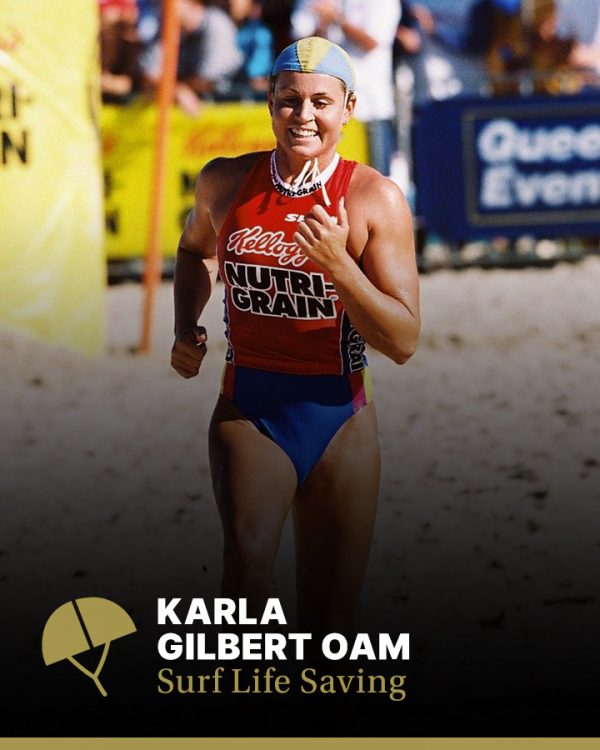 Karla Gilbert OAM was inducted into the Sport Australia Hall of Fame in 2005 as an Athlete Member for her contribution to the sport of surf life saving.

In 1990, having already won many State and National Junior Championships, Gilbert won at her first attempt in a professional Iron-woman event – which was also the first ever professional Iron-woman race in Australia. She was just 15 years of age and competed against older more experienced and established Iron-women like reigning champion Samantha O’Brien.

It soon became apparent that she would be a star in the senior ranks of surf life saving when in 1992 she won three gold medals at the world titles in Japan and took out the Queensland and placed second in the Australian Iron-woman championships.

Gilbert represented Australia at international events including the 1994 and 2002 World Championships, the 2001 Goodwill Games, 2001 World Games, and the 2001 Tri-nations Series.

In 2000 she won four Uncle Toby’s races in a row to beat Trevor Hendy’s record of 17 race victories and took that total up to 23 race victories in Iron-woman series race wins.

Gilbert retired from the sport that made her a national icon the same way she entered it – a prolific winner. The defining moment in an outstanding 21-year career was when she crossed the line in her very last race – the final round of the 2003 Kelloggs series doubling as the Australian Iron-woman championships. Victory was not guaranteed – in fact she had not won an Australian Iron-woman championships since 1994 (although she had won many Iron-woman series events). Trailing after the board, Karla overtook club mate Penny Turner in the swim leg to take the lead and maintained it to claim her most significant victory, thus ensuring she left the sport in the best possible way.

Through her involvement at the highest level Gilbert helped to raise public awareness of surf life saving in the community and created interest in the sport amongst members and non-members.