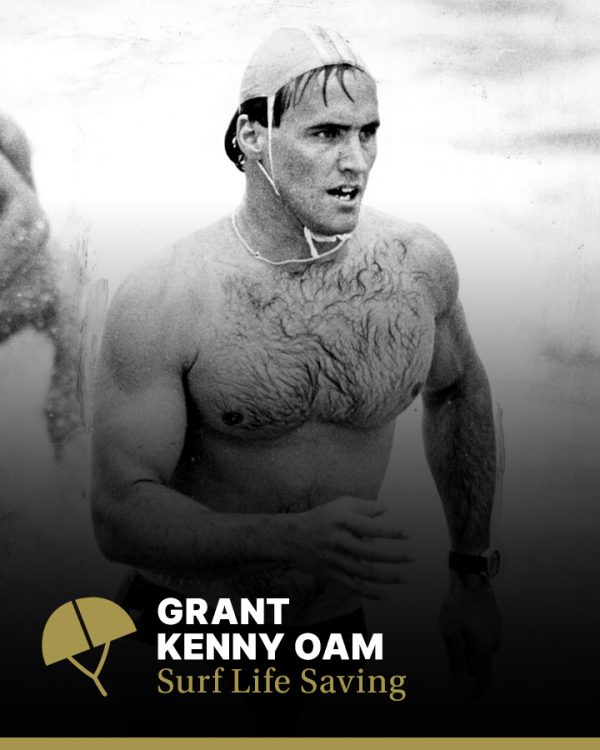 Undoubtedly the best known surf life saver of all time, Grant joined a Nippers squad when he was six and immediately showed promise. After the Nippers, he moved up through the cadets and juniors with Alexandra Headland Club.

He was Australian cadet Malibu champion at the age of 14 at Kingscliff and the same season won the state cadet ski and Malibu championships. In 1979 he won the Queensland state junior ski and junior Ironman titles. At 16 he was a member of the executive of the surf club.

He shot to stardom after winning the junior/senior double within 15 minutes at the 1980 Australian championships at Maroochydore at the age of 16. He looked certain to do the same thing the next year at Wanda when he won the senior Ironman and immediately went back into the surf for the junior event. He had his chances but was narrowly beaten over the line by Russell Cooper, of Cronulla. He also won the junior ski that year. His record at Australian titles boasts ten individual gold medals -more than any other competitor.

For training, he swam about four kilometres in the pool and then in the afternoon paddled nine kilometres up the local river.

By 1983 he had represented Australia against the United States and New Zealand in surf life saving. In 1985 he captained the victorious Australian team in New Zealand against the World Life Saving Invitational team.

From these performances, Grant became surf life savings ‘superstar’. He was engaged by the Kelloggs Company to endorse their breakfast cereal ‘Nutri-Grain’, and appeared in a television series and movie.

In 1981 he went to Europe for the world and European kayak titles and gained excellent experience against the Russians and other European competitors. It was reflected in his performance at the time of the 1982 and 1983 Australian surf titles.

He was back in Europe again in 1982 and was seventh in the open competition in his first year as a senior. He was up to three years younger than most of his opponents and impressed the Europeans with his potential.

Naturally his ski leg for the Ironman was his strongest point and it improved with world competition. He also showed remarkable improvement in his weakest leg, swimming, and demonstrated this at Moana and Karrawa in 1982 and Clifton Beach in 1983.

As a member of the Panamuna Men’s team on the Sunshine Coast, he twice won the Australian outrigger canoe titles and achieved a first and second in the world championships.

He has represented his country twice in the Olympics, with his best result being a bronze in kayaking at the 1984 Los Angeles Olympics with fellow surf life saver Barry Kelly. At the 1988 Seoul Olympics, Grant’s team came fourth in the K4 1000.

Grant’s achievements and his involvement in surf life saving saw a major resurgence within the sport and also a much higher public profile. Men and women of all ages with no previous interest in the sport were coming up to him at carnivals and asking for autographs and photographs. The kids idolised him. At club level, membership has never been higher from Nipper ranks to seniors and with competitor numbers at record levels.

Grant was awarded the Medal of the Order of Australia in 1986 for his services to surf life saving and kayaking.