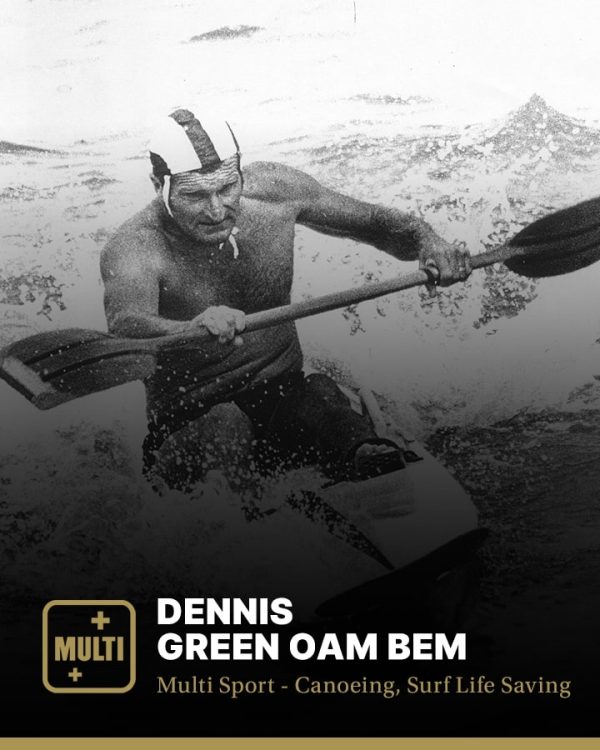 Dennis Green OAM BEM was inducted into the Sport Australia Hall of Fame in 1986 as an Athlete Member for his contributions to multiple sports.

When they coined the phrase “Ironman” in surf life saving they may well have had Dennis Green in mind. An Olympic bronze medallist, Green is not only one of the greatest surf-ski paddlers of all time but he was the first of a select band of athletes who can claim the honour of representing their country at five Olympic Games; 1956 Melbourne, 1960 Rome, 1964 Tokyo, 1968 Mexico City, and 1972 Munich, the first Australian athlete to compete at five Olympics. He was the Australian flag bearer in Munich.

In 1956, he paddled with his Maroubra teammate Wally Brown in the K2 10,000m. They were un-coached and remarkably, they had never raced another crew prior to the Melbourne Games. They had done time trials and their opposition was well aware of their tremendous speed. With one lap to go the Australians hit the lead but on the final lap the crews were required to race in their designated lane and the inexperienced Australians didn’t realise they would lose four lengths moving across to their lane. They never got that back but managed to finish third, winning the first Olympic medal by a non European nation in the Kayak event.

In 1981, at the age of 50, Green reached the final of the surf ski at the World Surf Titles in Bali, and he continued to compete in the surf in open events until 1984. He retired at the age of 60 as the National Coaching and Competitions Director of Surf Life Saving and moved from Sydney to the Gold Coast to accept the position of QLD Regional Director of Coaching for Canoeing at the Queensland Academy of Sport. Disadvantaged as a young rookie in 1956 with no coach, Green is giving plenty back to his sport and using his vast experience and knowledge of canoeing to help coach young Olympic hopefuls as part of the AIS development program.