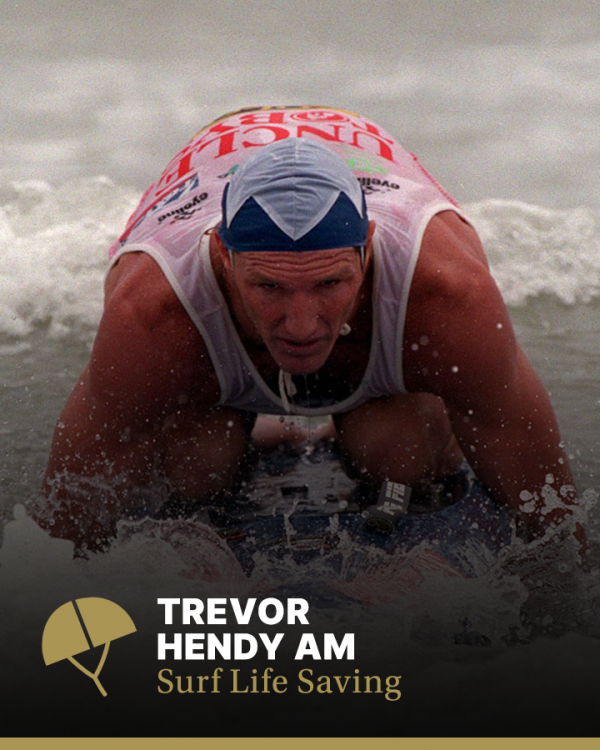 Trevor Hendy is unchallenged as ‘The Greatest Ironman in the World’ – a title that sits fittingly with the man who took up the sport as a ‘nipper’ in 1976, and went on to dominate it into the next century.

Competing for the Surfers Paradise club on the Gold Coast, Hendy has won six Australian Open Ironman titles, surpassing Grant Kenny’s record. His string of Queensland titles stretch back to the mid 1980s, and in 1994 he claimed his fourth consecutive World Ironman title in the United Kingdom, in a contest involving many qualifying rounds and intense competition.

As four-time winner of the Uncle Toby’s Super Series, Hendy was the man everybody wanted to beat. He won the series in its first year in 1989/90, and backed this up with outstanding performances during the 1990/91, 1991/92 and 1993/94 seasons. Other notable performances by Hendy include winning the 1992 Molakai to Oahu World Championships, and dominating the world Malibu championships in the late 1980s and early 1990s.

Hendy achieved a near perfect point score of five first placings and two second placings out of seven races in his 1993/94 win – a score never before achieved in the history of the series – and one which will probably take many years to surpass. In that same year, he won the Australian and world Ironman titles. Hendy currently holds the all-time record of six-time Australian Ironman Champion and four-time World Ironman.

After setting records that are yet to be matched, Hendy retired from Ironman racing in 1997 to concentrate solely on pushing a kayaking career with the dream of competing at the 2000 Sydney Olympics. He was a member of the Australian champion K4 1000 team to win consecutive national titles in 1997 and 1998, and a bronze medal at the World Championships in Germany. However, upon returning from the 1998 World Championships, Hendy decided to retire from professional sport. While he did compete in Ironman contests after this announcement, his focus turned to coaching and communicating as a motivational speaker and commentator.

Hendy was made a Member of the Order of Australia (AM) in 1996 for his services to surf live saving and the sport of swimming.