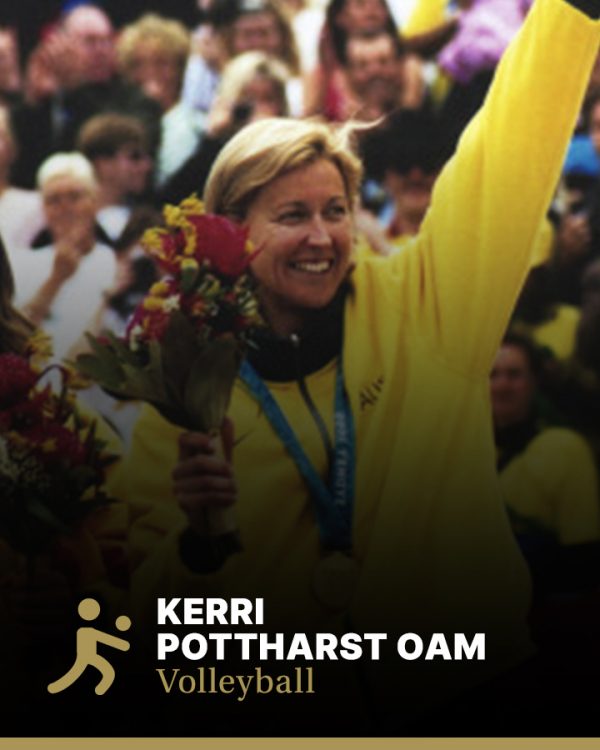 Kerri Pottharst OAM was inducted in the Sport Australia Hall of Fame in 2014 as an Athlete Member for her contribution to the sport of volleyball.

Pottharst is intrinsically linked in the public mind with Natalie Cook because of their gold medal winning partnership at the Sydney 2000 Olympics and their bronze in Atlanta in 1996. But they earn their places in the Sport Australia Hall of Fame as individuals because they also enjoyed significant success in other combinations.

Pottharst in fact first earned fame as an indoor volleyballer. She represented Australia from 1982 – 1992, captained the National Team in 1992 and played professionally in Italy for one season in 1990.

A knee injury in 1992 forced her off the hard court and she began playing beach volleyball.

She partnered with Natalie Cook to represented Australia at the Atlanta Olympics in 1996 (when beach volleyball made its debut as an Olympic competition) winning a bronze medal. In the same year, they combined for a silver medal at the world championships, and won the World Tour Event in Japan.

Cook and Pottharst split after Atlanta , but reunited in time for the Sydney Olympics. When they re-united after their Atlanta Olympic bronze medal, their global successes in FIVB events raised huge expectations for Sydney and they did not disappoint. They dominated the competition beating Brazilians Bede and Behar in straight sets in the final taking out the gold medal. In the aftermath of their Olympic win, the pair were awarded the Order of Australia and named in the Fédération Internationale de Volleyball’s Team of the Decade.

Pottharst briefly retired but then returned to pursue a third Olympic medal at Athens in 2004. Pottharst, now teamed with Summer Lochowisc.

Kerri Pottharst and Natalie Cook can be credited with raising beach volleyball to an elite sport in the eyes of the Australian public.

Outside the Olympics Kerri Pottharst won 8 Australian titles and a total of 92 FIVB world tour events before retiring.

She was president of the Australian Beach Volleyball Commission, operates a coaching business and has worked tirelessly to promote the sport.