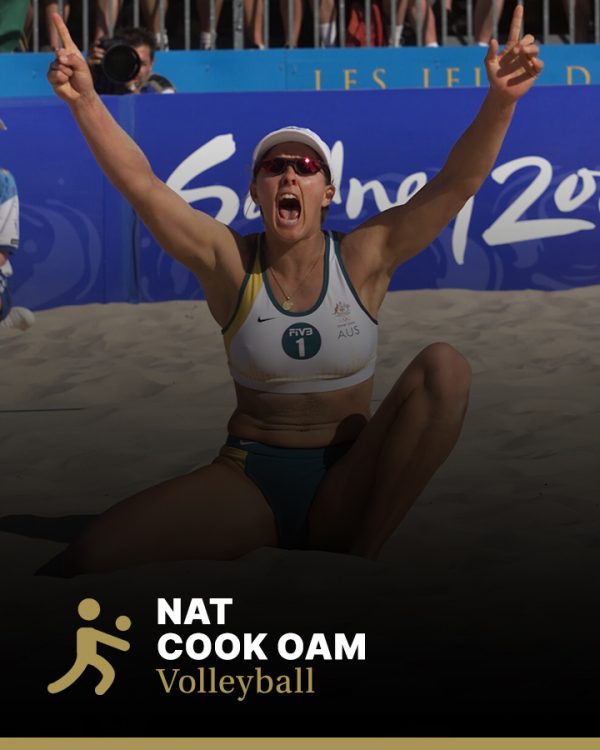 Natalie Cook OAM was inducted into the Sport Australia Hall of Fame in 2014 as an Athlete Member for her contribution to the sport of volleyball.

Her partnership with Kerri Pottharst earned Olympic gold in 2000 and silver in 1996 but also netted 92 FIVB tour victories, and help lift beach volleyball to elite sport status in the eyes of the Australian public.

After their 2000 victory the pair went separate ways. Cook teamed with Nicole Sanderson to reach fourth place in the 2004 Athens Olympics and with Tamsyn Hinchley to reach fifth in Beijing (2008) and 12th at the London Olympics (2012).

She continued to shine on the FIVB international circuit taking to final tally to 155 FIVB victories.

She was inducted into the International Volleyball Hall of Fame in 2013 and continues to coach and mentor juniors.

The beginnings: Born January 19, 1975, in Townsville ] She took up indoor volleyball as a teenager in Brisbane and swiftly made her mark, captaining the Australian Indoor Junior Team in 1992.

In 1993 she began playing beach volleyball. In 1994 she went professional and two years later represented Australia at the Atlanta Olympics.

Among her achievements since quitting competitive volleyball is the development of a program called Surf Volley, run in collaboration with Surf Lifesaving Australia, which is introducing thousands of young Australians to the sport.