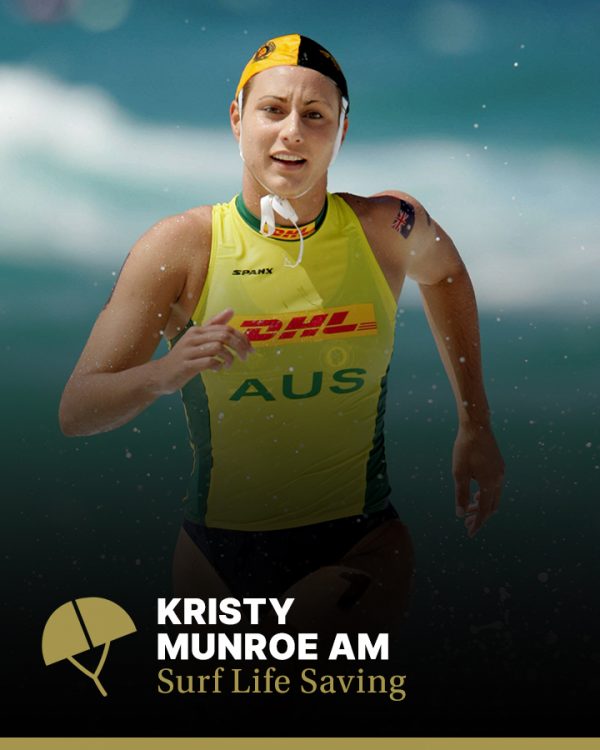 Kristy Munroe AM was inducted into the Sport Australia Hall of Fame in 2016 as an Athlete Member for her contribution to the sport of Surf Life Saving.

One of Australia’s most decorated lifesavers, Kristy Munroe won state, national and world championship ironwoman crowns – all before her 21st birthday. In a professional career spanning 11 years, Munroe captained an Australian surf lifesaving team to a World Titles event, a dual world champion in the ironwoman, board and ski events, a nine-time national champion, and a member of 8 Australian representative teams, with two as captain.

As an enthusiastic six year-old, Kristy Munroe followed in the footsteps of her lifesaver father Ray onto the beach at Alexandra Headland on Queensland’s Sunshine Coast.

The rise from nippers to state, national and world championship ironwoman crowns was just as swift as her ability to swim and paddle the board and ski craft that make up the ironwoman events. Prior to winning her first national ironwoman crown Munroe was selected as a junior to represent Australia in athletics and also competed at a national level in kayaking and triathlon.

As a teenager, Munroe claimed five consecutive Coolangatta Gold junior titles and became the youngest person to ever compete in the national surf lifesaving series at just 15 years of age. Munroe held her spot in the series for the next 11 consecutive seasons.

In total Munroe won two consecutive world ironwoman titles and secured podium finishes on her other two attempts. Aside from her pet event the ironwoman Munroe was also a multiple world and national champion in the board and ski disciplines.

Signing off on her career in 2008 and just 25, Munroe retired as one of Australia’s most decorated lifesavers.

After 11 years on the national series stage, Munroe was awarded a Member of the Order of Australia (AM) for her services to surf lifesaving. She is a member of both the Surf Life Saving Australia and International Lifesaving Federation Halls of Fame.