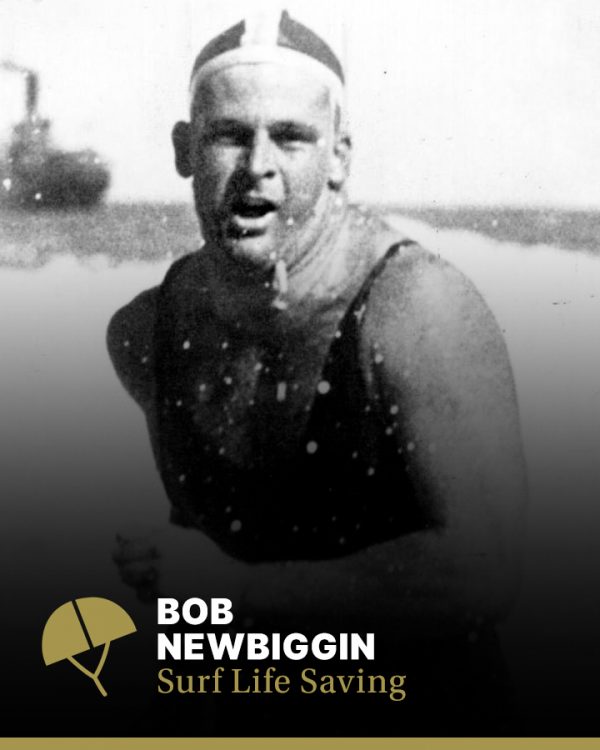 Regarded by a vast number of officials as the greatest surf swimmer in the history of the sport, Bob Newbiggin was a giant of a man who went on to compile a magnificent career record.

Bob grew up not far from the big and often unmanageable Newcastle surf. A noted surf swimmer he was also a fine still water swimmer and at the age of just 15 he was touted as a successor to ‘Boy’ Charlton. By the time his 16th birthday arrived, he had won the national junior 110yds title and held every national junior swimming record. He was acclaimed as the fastest schoolboy swimmer in the world.

Bob swam in the 440yds freestyle at the 1938 British Empire Games in Sydney, where he finished fifth in the heat with a time of 5:19.8 seconds. After the Games, he stunned officials by announcing that he wanted to concentrate solely on surf swimming, and joined Cooks Hill Surf Life Saving Club. In his first season (1937/38) he won both the Australian junior surf and belt titles. The following year (1938/39) he repeated the wins to record an unprecedented double. (Belt competition consists of competitors swimming with a rescue belt around their waist about 120m offshore to a designated buoy).

In a remarkable career Newbiggin, a noted big surf competitor, won the senior surf championship of Australia in 1939/40. In the 1940/41 season the Surf Life Saving Association decided that there would be no national championships however the states were free to continue holding competitions. Bob won the 1940/41 New South Wales senior surf and belt titles. During the Second World War he became a Flight Lieutenant with the RAAF and flew over thirty missions over Germany. Returning to competition after the War he won the senior surf championships three seasons in a row, 1945/46, 1946/47, and 1947/48.

Newbiggin was a member of another four clubs, Manly, Nobbys, Ballina, and Tasmanian club Hobart-Carlton where he was the first captain and chief instructor.