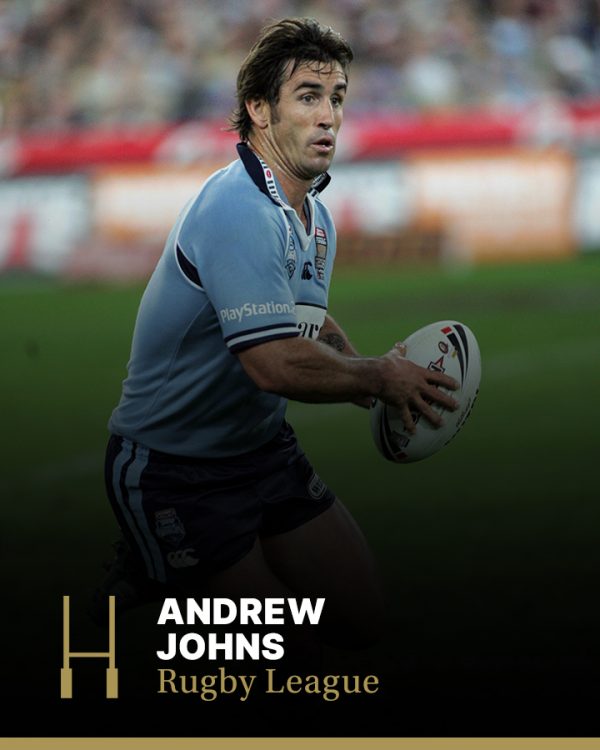 Andrew Johns, born in Cessnock, NSW, but indelibly associated with the Newcastle Knights, was one of the finest half-backs in NRL history.

A talented junior, he made his first grade debut for the Knights in 1994, shortly before his 20th birthday playing alongside elder brother Matthew. He was an instant success, scoring 23 points and being voted man of the match. He was voted Norwich Rising Star in his debut season.

A year later he was picked in the NSW State of Origin team. It was to be merely the first of 23 such appearances, including six as Captain. That same year he was also selected in the Australian team which retained the Rugby League World Cup in England.

His career suffered an interruption in 1996 when for a period he questioned the value of life as a professional sportsman, but having resolved these personal issues he returned the following year to play a pivotal role in Newcastle’s 1997 Grand Final victory over Manly.

NRL fans suffered further angst in 2004 when Johns was made a lucrative offer to switch codes to Rugby Union where most commentators believed he would be assured of Wallabies selection. Counter offers by the NRL persuaded him to stay.

Andrew Johns remained a dominant force in NRL until a neck injury forced his retirement in 2007. His record reads:

Club: 249 NRL games, two premierships (one as captain) and a record 2176 points scored for Newcastle Knights. He also scored 29 points in 2005 during a brief part-season contract with British club Warrington.

Such sustained success earned him a string of awards, including:

In a 13 year career he captained his club, his state and his nation to success. There can be few better CV’s in Rugby League’s proud history.