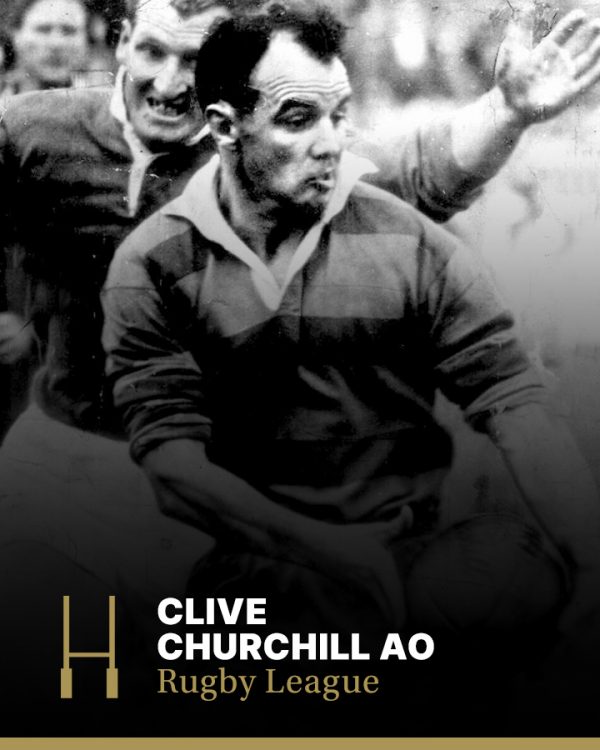 There have been few players in rugby league history who could be compared with Clive Churchill for courage and brilliance. Tagged ‘The Little Master’, Churchill stood 175cm tall and weighed no more than 76kg. Despite the lack of size he was noted for his last line of defence and flair in attack.

At the age of 12, Churchill travelled to Sydney to play on the SCG in a schoolboys match with a Newcastle representative team. The late ‘Jersey’ Flegg, who at the time was president of the New South Wales Rugby League, was at the Sydney Cricket Ground to watch the game and afterwards he addressed the young footballers. Pointing to Churchill, Flegg said: “And over there I see a youngster who wore the number six jersey, and I predict one day he will become an international and captain Australia in Test football.”

Not only did this bold prediction come true when Churchill played for Australia less than a decade later, and then go on to captain Australia, but he also turned out to be one of the greatest fullbacks of all time.

Born in Merewether, Newcastle, Churchill started his playing career as a fullback with the local Centrals club (later called ‘Central Charlestown’) in the 1946 Newcastle competition. Later that season the great Ray Stehr at Eastern Suburbs became aware of the talented young Churchill and wrote to him in Newcastle. Churchill replied that he would play for Easts the next season (which didn’t eventuate). Not long after playing for Country Seconds in front of 55,000 fans at the SCG in 1947, Churchill was visited in Newcastle by South Sydney patron, Dave Spring, who signed him on the spot – for £12 a win and nothing for a loss!

Upon his arrival at Souths for the final games of the 1947 season, he was told his first game would be a “picinic match” for Souths against Wollongong. Churchill played his final game in Newcastle and then immediately travelled by train to Sydney to meet up with the Rabbitohs for the journey to Wollongong. Churchill suffered an injury early in the game and played a shocker. He then asked Spring on the train journey back to Sydney if he could return to Newcastle as “I did not think I would make the grade”. But the Rabbitohs convince him to stay.

From that point on Churchill’s career took off. During the 1948 season he was selected in the Australian team for the second Test against the touring Kiwis, despite not yet having played for NSW. His dramatic rise was complete when he was selected in the 1948 Kangaroos and played in all five Tests on tour. During 1949, Churchill fielded an enormous offer from Workington Town of £10,000 but he couldn’t beat the international transfer ban in place at the time.

Churchill played 34 Tests for Australia and the 1954 World Cup series. For six years he was Australia’s captain, including three series against Great Britain. Churchill’s leadership was particularly valuable in the third Test of the 1950 series against the British Lions that saw Australia win back the Ashes for the first time in 30 years.

For Souths, Churchill’s leadership skills were not seen to there fullest as Jack Rayner was entrenched in that role. However, Churchill’s undoubted playing talents helped the Rabbitohs to premierships in 1950, 1951 and 1954 (he missed the latter part of South’s successful 1952 title defence as he sailed with the Kangaroos to England).

1955 produced one of Souths and Churchill’s most memorable achievements. During the back end of the regular season Souths had been riding the play-offs tightrope and had to win every game. They were still on track to clinch a finals berth up until they met Manly at Redfern Oval. In the early moments of the game Churchill broke his arm in an attempted tackle on winger George Hugo, but despite his injury refused to leave the field. Ignoring the pleas of the Souths club doctor at half-time Churchill returned to the fray and did not reveal to anyone the pain he was in. But his effort seemed to have been in vain as Manly clung to a 7-4 lead into the final minutes of play and Souths season seemed over. In the dying moments Souths lock forward Les ‘Chicka’ Cowie crashed over for a try just inside the corner post. The fulltime bell had gone.

Captain Rayner was undecided who to give the conversion attempt to and Churchill was on the other side of halfway with his body drooping heavily to the left in obvious pain. But despite Churchill not being the team’s regular kicker, Rayner called him over as he knew that he was the one player who could handle the pressure of the moment. Churchill needed another player to place the ball down for him, but in one of the game’s most dramatic moments, Churchill calmly guided the ball between the posts to give Souths a famous victory, even though his own season was effectively over. As Souths progressed through the finals the significance of that kick grew until on grand final day the Rabbitohs won the title and Churchill’s effort was given the ultimate reward.

Churchill played his final Test for Australia on the 1956/57 Kangaroo Tour, finishing with a record 24 Tests as captain. He finished playing with South Sydney after being captain-coach for the 1958 season and moved to Queensland for his final playing season.

In 1959 Churchill captain-coached Brisbane Norths to the premiership and coached Queensland to an unlikely series win over the NSW Blues. He also played his final representative game for Queensland against New Zealand.

Churchill also turned his hand to fulltime coaching with considerable success. He coached Queensland and Australia and then steered his old club South Sydney to five grand finals in a row from 1967 to 1971, winning them all except for 1969.