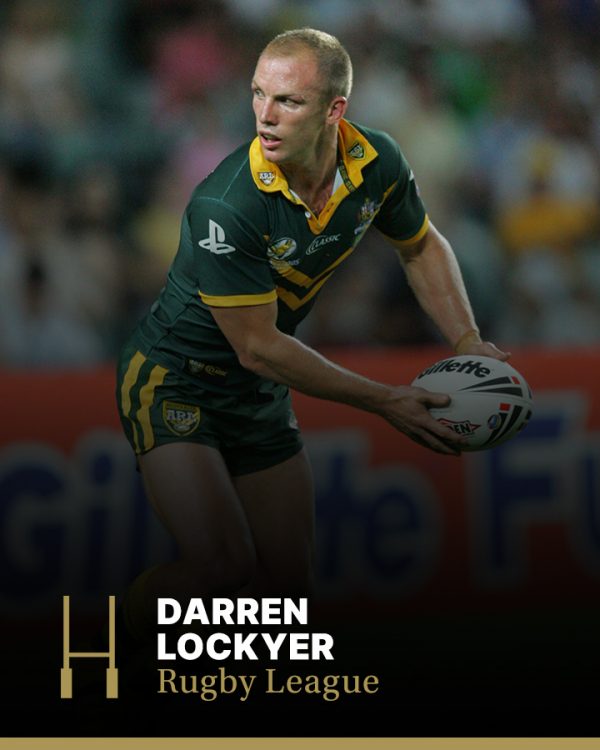 Darren Lockyer was Inducted into The Sport Australia Hall of Fame on October 11 2018 as an Athlete Member for the sport of rugby league. In a record breaking 355 capped appearances for the Brisbane Broncos, the champion of the sport is widely acknowledged as one of the finest and most durable players in the history of the game. His retirement in 2011 finished a career breaking achievement and longevity records at not just club but state and national level, winning almost every major individual award available along the way.

In a superb 17-year career as a full-back and five-eighth he played the most games for the Broncos (355), Queensland (36 State of Origin plus two during Super League) and Australia (59 plus four during Super League). He also captained Australia the most times (38) and scored the most tries (35) and won the World Cup in 2000. He captained Queensland in 22 State of Origin games, second only to Wally Lewis’s 30. He starred in four Broncos premierships in 1997, 1998, 2000 and 2006 and seven successful State of Origin campaigns as well as two drawn series. He won the Wally Lewis Medal for the player of the series in 2006 and the Clive Churchill Medal for best player in the 2000 Grand Final. He was the Broncos’ club player of the year three times.

Lockyer started his sporting life in Queensland as a hugely promising Australian rules footballer -his father David’s game -but switched to League in his early teens, playing for school and club in rural Wandoan before moving to Roma where he played first grade for Cities Gladiators at 15. There, he attracted the attention of renowned Queensland Rugby League recruiter Cyril Connell, who alerted the Broncos that he had spotted an outstanding young talent. Lockyer was offered a scholarship by Brisbane, for whom he made his first-grade debut off the interchange bench, aged 18, during the 1995 season, going on to be named the club’s rookie of the year. He quickly showed his versatility in the centres and at full-back, proving a creative, attacking player, a safe defender under the high ball and an exceptional goal-kicker.

Lockyer finished his career by captaining the Australian national team to victory in the 2011 Four Nations, scoring a try with the last play of his last match, which was against England at Elland Road. He was known not only as a superb performer but a fair one, having never been suspended or even charged by the judiciary systems.

Among a long list of awards and decorations, he was named at full-back in the Queensland Rugby League’s team of the century in 2008 and twice won the Golden Boot award for the International player of the year, once (2003) while playing full-back and once (2006) from five-eighth. He was the first player to win it in different positions. In 2008 he was named in a list of Australia’s 100 greatest players which was commissioned by the NRL and the ARL to celebrate the code’s centenary year in Australia, the only contemporary player on the list. The Queensland authorities have named part of a highway after him and commissioned a life-size sculpture which sits beside one of The King, Wally Lewis, outside the Lang park stadium.