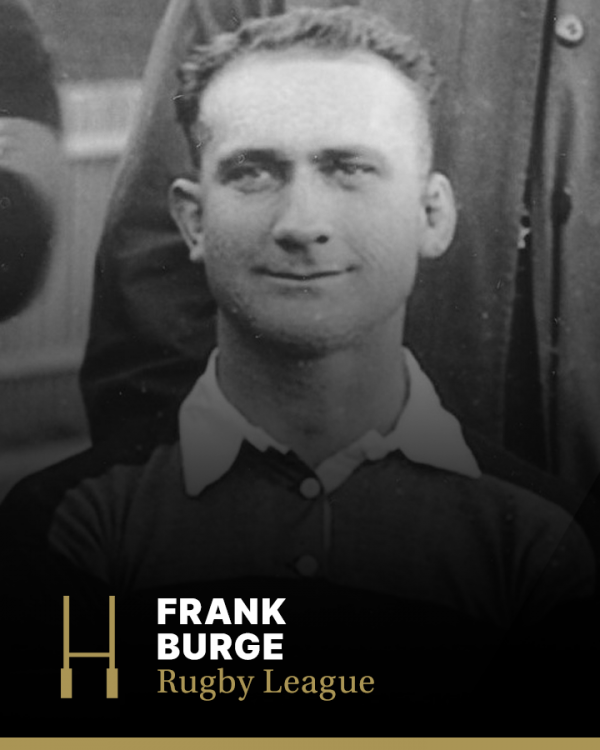 Frank Burge is without a doubt, the greatest try scoring forward the game has ever produced.

A dashing attacking lock forward, he was equally at home in the second row or at prop. He scored 146 tries for Glebe at a rate of nearly one per match in 154 games before retiring in 1927. It was to become one of rugby league’s most enduring records. He was one of the fastest men of his era.

Frank played for the South Sydney Rugby Union Club and started his career in first grade union as a 14 year old front rower, an extraordinary achievement. Playing wing in his debut match in second grade, he was called off the field 20 minutes from the end because the first grade winger had not turned up. After a hot bath and a massage, he took the field for this first grade debut.

Following the emergence of rugby league, Burge joined Glebe in 1911 at the tender age of 16. He was immediately placed on the Kangaroos short list and was unlucky not to tour that year. Many judges asserting he missed that tour only because he was only 16. In terms of physique and skill, though, he was already a match for forwards with far more experience.

He eventually toured with the Kangaroos in 1921, scoring a record 33 tries. However Australia was unlucky to lose this series as Burge always claimed he scored a legitimate try which was disallowed. On a wet ground he slid over the line in the mud as he was tackled and although he was emphatic the try was fairly scored, the referee ruled that no sliding tries were allowed in England. Australia lost that Test 6-5 so the referee’s decision swung the game and as it turned out later, the Ashes. His all round skills won great admiration from British crowds and led to an offer from soccer club Everton of £3000 to convert to soccer. The offer was rejected. He also featured in Tests against the touring Great Britain side in 1914 and in 1920.

In a match against Auckland Province in 1919, Australia won 93-5, with Burge kicking 13 goals. Burge’s distinctive long-striding running style saw him score six tries for Sydney against a touring Maori side in 1922.

On the club scene he was a prolific, if controversial, figure for Glebe. A strong supporter of trade unions, Burge was instrumental in Glebe’s strike of 1917 when the players from that club did not believe they were getting a fair go from the NSWRL. He received the longest suspension of any of the players but was reinstated at the start of the 1918 season. In 1920 he scored the most tries ever in a first grade match, crossing for Glebe eight times.

Following an offer of £200 from club secretary Reg Fusedale, Burge went on to captain-coach St George. By then, Frank was already a household name and could have linked up with any one of a number of clubs. But he took up the St George offer knowing full well that they were a club in need.

The critics however were proven wrong when under the guidance of Burge, St George made a remarkable turnaround. Burge instilled a sense of dedication in the St George Club, moving from last in 1926 to runners up in 1927. In 18 rounds, the Saints lost just three matches, one to Wests and two to the minor premiers and 1927 champions, South Sydney. At the age of 33, Burge played only the one season with Saints as player-coach but he still scored nine tries in 16 games.

His philosophy was simple; positive football and pride in yourself and your club. This attitude sank deep into St George and became a foundation stone, which would carry the club for many years to come.

Club official Alex Mackie recalls Frank Burge as, “the first of the pros.” “He didn’t drink -and in the things like diet and lifestyle, he was ahead of the rest.” Frank would start training months before a season began and was always the fittest man in any team in which he played.

His toughness was legendary, and the story goes that in his early years he broke his arm while playing for Glebe. With part of the bone protruding through the flesh, his brother Peter asked him “You’re not going off are you?” Frank retorted, “I hope you bloody well don’t think I am”. He stayed on the field until he collapsed and had to be carried off.

Frank then went on to coach Glebe, Newtown, Canterbury, Wests, Easts, and North Sydney before returning to St George in 1937 where once again, he lifted the listless club – this time from second last place to equal second place. A dominant influence, Burge continued to have a positive impact on the game’s development well into the 1930s.

Frank ‘Chunky’ Burge had a profound influence on the game – this is still evident today in the running style of the modern forward and the professionalism of the modern coach. In the 1920s, Arthur Hennessy, arguably the code’s first great coach, said of Burge: “I have no doubt that Frank Burge is the greatest player-coach today. He knows the value of possession and he knows everything worth knowing.”