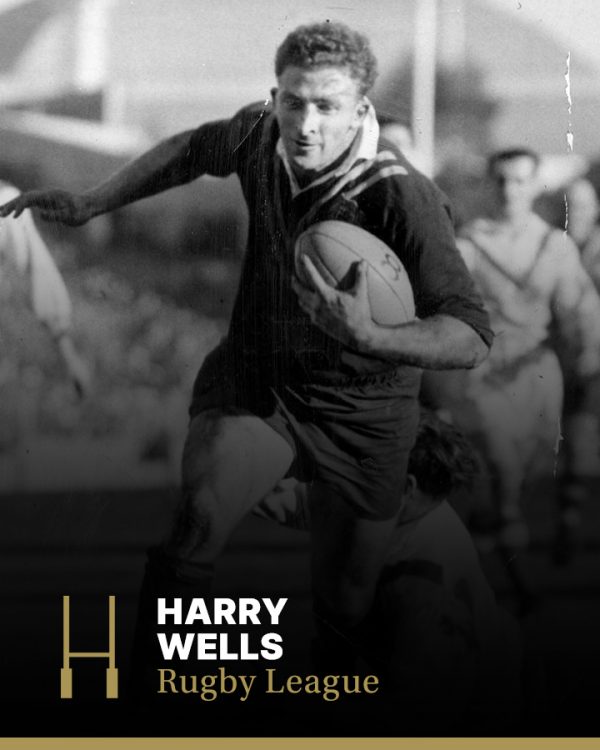 Harry Wells was Inducted into The Sport Australia Hall of Fame on Thursday 13 October, 2016 as an Athlete Member for the sport of Rugby League.

Harry Wells played 29 tests for Australia in a career that saw the dashing centre play for NSW, South Sydney and the Western Suburbs club teams in addition to representation at three World Cups for the Kangaroos. He played in the 1951 Sydney premiership winning side with South Sydney.

Born Harry Wills, Wells came from a family of boxers. Both his father and grandfather fought under the same name ‘Dealer’ Wills and Harry displayed many of the skills from the ring in his career as a centre.

Originally form Wollongong, Wells made his debut for South Sydney in 1951, playing on the wing in Souths premiership win over Manly in his first season.

In 1952 he returned home to Wollongong, however he still made his state and national representative debuts, playing for NSW and the Kangaroos in the first of 29 test appearances. Wells represented Australia in eight World Cup matches across three World Cup campaigns in 1954, 1957 and 1960. He formed a strong combination with Sport Australia Hall of Fame legend and member Reg Gasnier – with the duo playing 12 tests together.

It wasn’t until 1956 that Wells returned to the Sydney premiership, this time with the Western Suburbs club.

The club was dubbed ‘the Millionaires” as they lured a string of high profile players in an effort to win the premiership. He played 85 games for the ‘Magpies’ from 1956 to 1961 where he scored 32 tries and captained the club in the 1958 grand final loss to St George. Three further seasons at West’s preceded a return to the country before retiring in 1972 at the age of 40.
He was named at centre in the Western Suburbs and West Tigers Team of the Century and in 2007 he was inducted into the Australian Rugby League Hall of Fame.