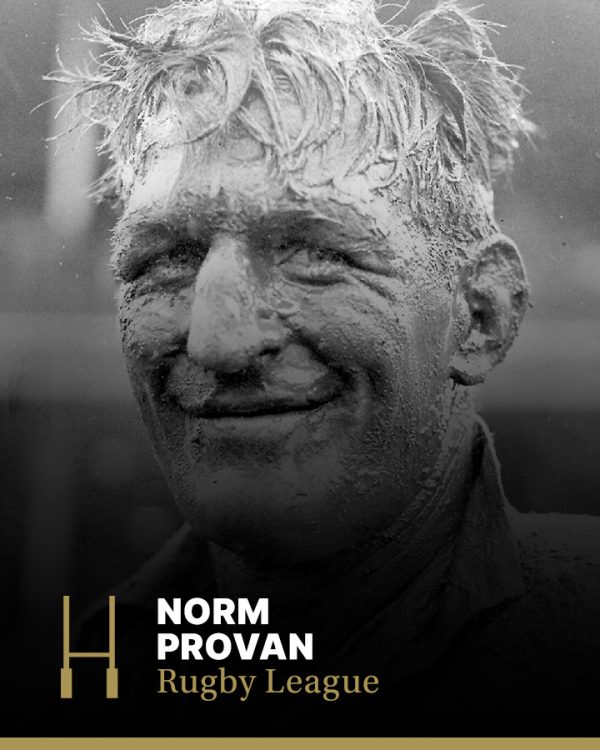 Norm Provan was inducted into the Sport Australia Hall of Fame in 2015 as an Athlete Member for his contribution to the sport of rugby league.

Norm “Sticks” Provan played a key role in one of the greatest winning streaks ever achieved in any elite sport in Australia – he played in the first ten of St George’s eleven consecutive premierships between 1956 and 1966.

As a strongly-built, 193cm, 99kg second-row forward who was a non drinking fitness disciple, Provan debuted in 1951 and accumulated a club record 256 first grade games, in which he scored 63 tries and 191 points. In a representative career cut short by family and business commitments, he played 19 matches for New South Wales and in 14 Tests for Australia, that included two in World Cups, between 1954 and 1960.

He played finals football in 15 consecutive seasons from 1951, which included 11 Grand Finals – an Australian rugby league record – and in his last game, the 1965 Grand Final, he played in front of a record crowd of 78,065 at the SCG and helped steer the Dragons to a 12-8 defeat of South Sydney.

In the modern day it is almost unimaginable that the player-coach role once existed, however, Provan not only held both jobs at St George from 1962-65 he also took the Dragons to four premierships and won 66 of 81 matches for a remarkable success rate of 81%. After retirement, he coached the Dragons again in 1968, Parramatta in 1975 and Cronulla-Sutherland in 1978-79, which took his overall coaching record to 123 wins from 180 matches at 68%. He guided Parramatta to the pre-season Cup, the club’s maiden first-grade title, and to within one game of what would have been its first grand final, while in 1978 Cronulla and Manly drew in the grand-final with Manly winning the playoff three days later. The following year Cronulla went on to win the Amco Cup under Provan’s coaching.

Provan is a St George Life Member and was named in the second row of the Australian Rugby League and NSW Teams of the Century. He was inducted into the Rugby League Hall of Fame and named on a list of Australia’s 100 greatest players and in 2008 was elevated as the thirteenth Rugby League Immortal.

He was also immortalised by newspaper photographer John O’Gready in the famous photograph of Provan embracing Western Suburbs captain and dual international Arthur Summons, both of them caked in mud at the end of the 1963 Grand Final. The image, known as ‘The Gladiators’, is now perpetuated as the NRL premiership trophy.