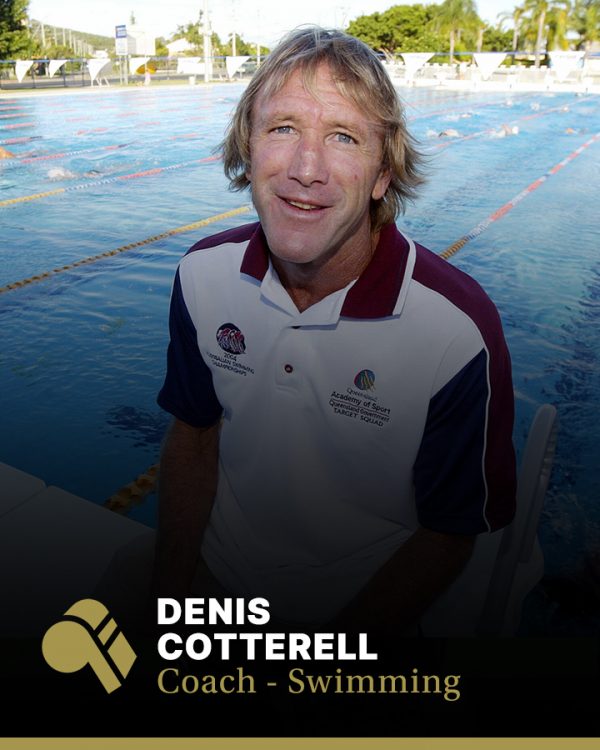 Denis Cotterell was inducted in the Sport Australia Hall of Fame in 2014 as a General Member for his contribution as a coach to the sport of swimming.

Cotterell has been coach at Miami Swimming Club, Queensland, since it was formed in 1976 and has coached Australian swimming teams since 1987 at Olympic and Commonwealth Games and at World and Pan-Pacific championships.

Cotterell is best remembered as coach of Grant Hackett who came to Miami club as a “learn to swim” junior and under Cotterell’s tutelage won three Olympic gold medals along with three silver) and ten world titles and remained at the top of world 1500m swimming for a decade. But Hackett is merely the brightest star in a galaxy of Cotterell protégés: He also coached international stars like Giaan Rooney, Andrew Baildon and Daniel Kowalski.

Among his proudest achievements though he lists the scores more youngsters he has coached over since 1976 at junior level, helping them become the best they could be. His record in bringing young swimmers through to national standard led to him twice (2005 and 2008) being voted Australia’s age group coach of the year.

International rivalry for his services: There was controversy when, in the lead up to the 2012 London Olympics, a squad of Chinese swimmers moved to Queensland and joined the Miami Swim Club with the undisguised intention of training under Cotterell, rightly regarded as the world’s top coach of distance swimmers. Many people were concerned that Cotterell’s knowledge -considered one of the prime assets of Australian swimming -should be available to other nations. In his defence others noted that he has never accepted offers to move to the US or other swimming nations who would have welcomed his services; his life has been dedicated to Australian swimming.

The Chinese contingent departed well before the Games but when Sun Yang took out the 1500 metre gold medal in London he openly hugged Cotterell in acknowledgment of the master coach’s contribution to his success.

Dennis Cotterell continues to identify and develop Australian talent and his sites are firmly fixed on the 2016 Games in Rio.

His impact on Australian swimming is indelible.