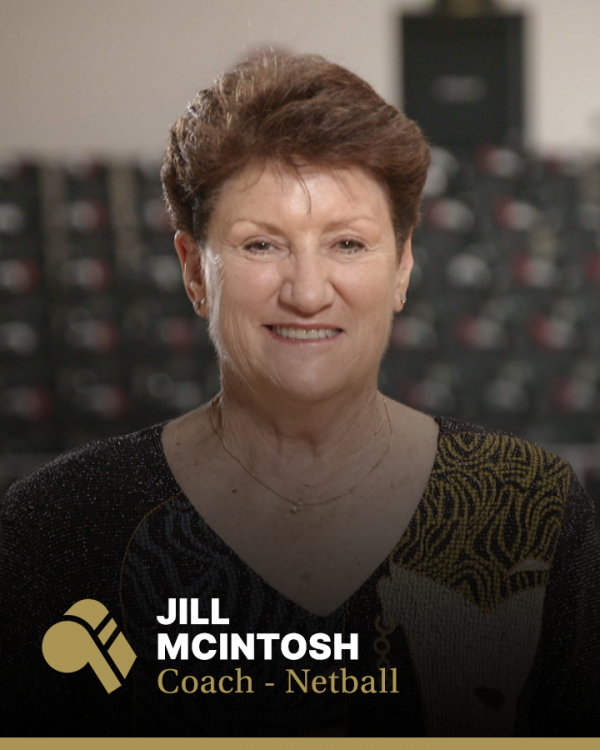 Jill McIntosh was inducted into the Sport Australia Hall of Fame on Friday, December 4, 2020 as a General Member for her contribution to the sport of netball.

Jill McIntosh has been a hugely successful netball coach and educator, while also contributing substantially as an umpire. This is all after being a distinguished player. Jill’s biggest impact in netball has come from coaching, where she guided the Australian team in 88 matches between 1995 to 2003, losing only six! This resulted in an impressive 94 per cent winning rate. In this time, Jill collected two Commonwealth Games gold medals two world championships, all of which were unbeaten campaigns. Jill has continued to educate the netball fraternity; sitting on coaching committees and advisory panels to provide professional development for coaches around the world.

McIntosh’s biggest impact on the sport was being a hugely successful coach and educator, while also contributing substantially as an umpire and being a distinguished player.

She was highly influential in every aspect of netball, from juniors to international, making it understood that high quality coaching at every level is the best possible foundation for the development of elite athletes. These philosophies have been recognised all over the netball world.

The daughter of champion Perth footballer Merv McIntosh sport is in her blood. As Jill grew up, she first started playing netball in grade 3 while simultaneously becoming a WA schoolgirls representative at age 14 for swimming. Even then she was dabbling in coaching her young team-mates.

McIntosh became a fixture in the WA senior team between 1973 and 1986, the last seven of those seasons as captain-coach. She made the Australian team in 1974, going on to play 29 Tests including a significant role in the 1983 world championship triumph, two years after being named Netballer of the Year and elevated to the national captaincy.

Jill became coach of the national team in 1995 through to 2003, winning 88 matches and losing just six for a remarkable winning strike-rate of 94 per cent. This included two gold medals at the Kuala Lumpur 1998 Commonwealth Games and the Manchester 2002 Commonwealth Games, and two world championships in 1995 and 1999, all of which were unbeaten. Before that, McIntosh was head coach at the Western Australian Institute of Sport, Australian Institute of Sport and the Australian under 21 coach and national coaching director.

In 2005 McIntosh was appointed the inaugural chair of the International Netball Federation’s (INF) coaching committee and has continued to Chair the INF Coaching Advisory Panel from 2009, which allows coaches across the globe to incorporate professional development into their work.

Jill was inducted into the Netball Australia Hall of Fame in 2009 and received the International Netball Federation’s service award in 2013.