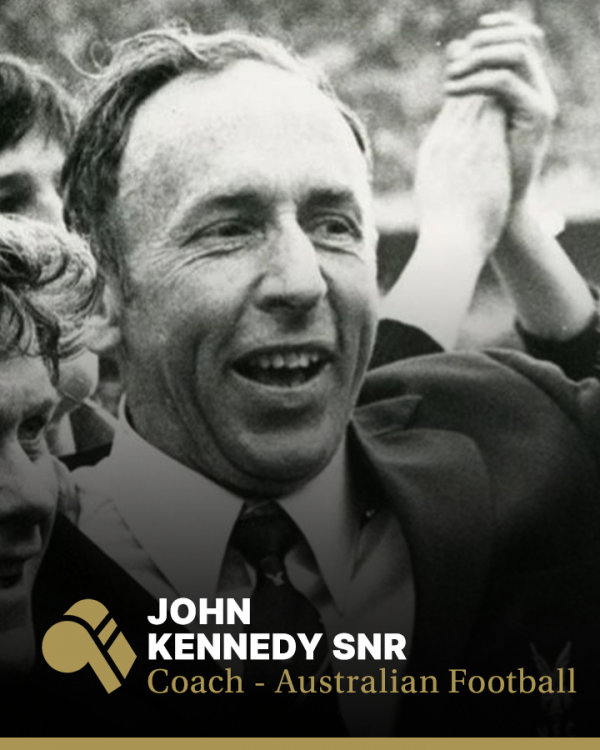 In 1960, Kennedy took over as Hawthorn coach, leading Hawthorn to its first ever Premiership in 1961. He did this by developing Hawthorn as the fittest and strongest team in the then VFL. In fact he was such a great coach that the rules were changed to try to beat his team. Opponents thought that the crowding of the centre by the super-fit Hawks gave them an advantage. New rules allowed two ruckmen, the rover and the centreman only in the centre for the bounce, but it made no difference.

Hawthorn won another premiership in 1963 before Kennedy left to take up a country coaching post at Stawell. But Hawthorn’s poor onfield performance over those few years saw him recalled to the role in 1967, guiding the club to another two flags in 1971 and 1976. He then stood aside to allow David Parkin to take the reins.

His battered raincoat became a trademark, and he was revered as a master tactician with a determination to stick to his guns. After the Hawks had lost several games in a row, Kennedy told all players to assemble at the Boulevard at 5:30am the next day. The players were rugged up against the Melbourne winter but Kennedy led the training session wearing an old singlet, shorts, and no shoes.

The football world was surprised when North Melbourne coaxed him out of retirement in 1985 where he continued his successful coaching career until 1989. During his five seasons, he redefined North’s values and constantly reinforced these values with players and administrators alike.

He served on the boards of management at both Hawthorn and North Melbourne and as Chairman of the AFL Commission from 1993 to 1998.

Kennedy was inducted into the Australian Football Hall of Fame in 1996 in recognition of his outstanding coaching career. In June 2020 he became the 29th person to be elevated to Legend status.