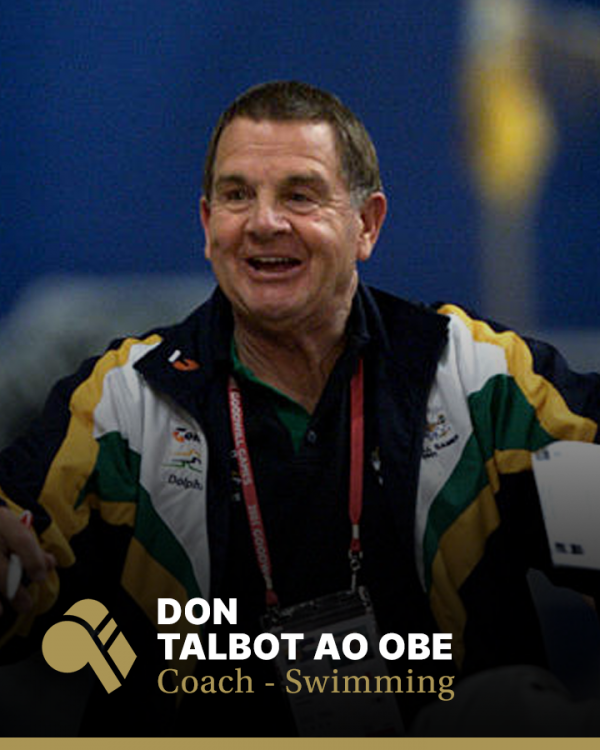 Arguably Australia’s most successful swimming coach, Don Talbot made history when he stepped down as Australia’s Olympic Games coach to accept a position as coach of the Canadian Olympic team.

Talbot showed potential as a swimmer when he won the New South Wales Under 14 backstroke championship in 1946/47 and collected a number of other junior titles. Although his potential was never fulfilled, he gained success in another field when he entered the teaching profession and devoted his spare time to teaching youngsters to swim and coaching promising juniors.

Talbot helped leading coach Frank Guthrie at the Bankstown Pool in Sydney’s western suburbs and picked out one of his own pupils – John Konrads – as a youngster with future. Talbot took over John’s coaching and saw potential in John’s younger sister, Ilsa. John blossomed under Talbot’s coaching discipline and Ilsa, an unwilling pupil in her early days, eventually accepted the Talbot system. The two youngsters from Latvia, who could not swim when they came to Australia, went on to represent Australia at Olympic and Commonwealth Games, set world records, and in John’s case, win Olympic and Commonwealth gold and in Ilsa’s case, Commonwealth gold.

While the Konrads were the first young swimmers to reach world prominence under Talbot, they were not the last. Among many others, Talbot either single handedly or helped, take to the top such champions as Kevin Berry, Neville Hayes, Bob Windle, Brad Cooper, Gail Neall, and Bev Whitfield.

Almost feared as a disciplinarian by his pupils, Talbot was always fiercely loyal and supportive. He paid his own way to the 1960 Rome Olympics to cheer on the ‘Konrads Kids’ and Kevin Berry and in 1964 went to Tokyo as the Australian Olympic men’s swimming coach. He was present at all subsequent Olympic Games as part of the Australian contingent until 1976 when he accepted an offer from the Canadian team for the 1976 Olympic Games and the 1978 Commonwealth Games. He was the national head coach for Swimming Canada, leading it to its greatest period of success in the 1984 LA and 1988 Seoul Olympics.

In 1989, Talbot took the reins as Australian swimming’s national head coach. What followed was twelve years of Talbot demanding – and getting – quality, commitment, ‘team’ and innovation; culminating in Australia ‘winning’ the 2001 World Swimming Championships – a pinnacle few thought achievable.

Never before had Australia come out on top since the beginning of the championship in 1973, and not since the 1956 Melbourne Olympics had they beaten the Americans in the pool.

At the 2000 Sydney Olympic Games, Australia and the world witnessed the results of over a decade of Talbot’s coaching and belief in Australian athletes. Here Australia producing its best swimming performance since the 1972 Munich Olympics, finishing second to the USA with five gold, nine silver and four bronze.

In 1981, Talbot was made an Officer of the Order of the British Empire (OBE) for his service to sport.