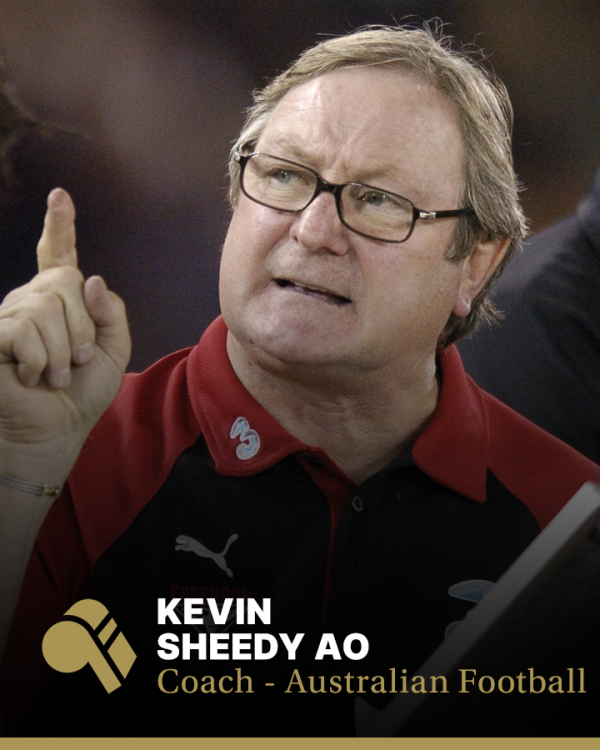 Kevin Sheedy AO was inducted into the Sport Australia Hall of Fame in 2009 as a General Member for his contribution to the sport of Australian Football.

Sheedy has an impressive record in Australian football as player and coach, but despite his epic achievements in these roles, his most profound influence may be the innovations he proposed and supported. He has left an indelible mark on the game.

At his retirement some commentators observed that his considerable achievements were due not so much to abundant natural talent but to determination and the thoughtful application of his abilities.

This ability to analyse quickly became evident when he took over as coach of Essendon in 1981 and began building the sides that won Premierships in 1984 and 1985.

For many involved in Australian football however, Kevin Sheedy’s most enduring legacy will be the changes that he promoted and supported. He was a proponent of the extended interchange bench (from two payers to four) which has eased the physical demands on players caused by the increasing speed of the game and of the creation of the annual Essendon-Collingwood ANZAC Day fixture. He was also, with Essendon committeeman Bill Kelty, an architect of AFL traineeships to provide career opportunities to footballers.

Kevin Sheedy has been a great promoter and supporter of indigenous players, developing initiatives to take the game to indigenous communities and to foster and develop promising players. He also promoted the creation of an annual Essendon-Richmond Dreamtime match to recognise their achievements. He has watched with pride as these and other initiatives have brought about a steady expansion of the number of indigenous players, the rewards they enjoy and the role models they provide. For all the Premiership trophies he has held aloft as player and coach, it is this legacy that may give him greatest satisfaction.