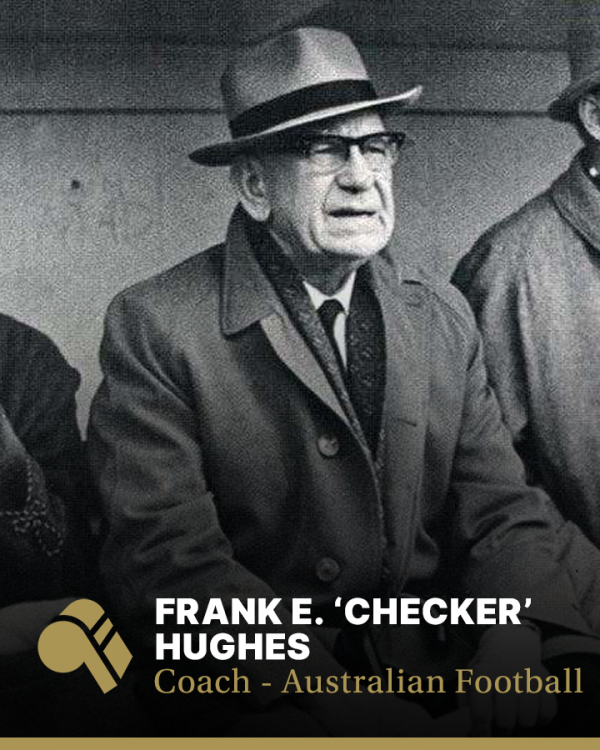 Melbourne Football Club’s fortunes turned around when they convinced Percy Page to transfer from Richmond to take the secretarial post at the club. Page brought with him F.E. ‘Checker’ Hughes who was appointed coach for the 1933 season. Hughes had played in two premierships at Richmond and later coached them after a stint in Tasmania. Together Page and Hughes set about changing Melbourne’s lilywhite image from “Fuchsias” to “Demons”.

Legend has it that, early in his tenure, Hughes told his players: “You are playing like a lot of flowers. Lift your heads and play like demons!” The name was promptly embraced and the ‘Demons’ went on to win four premierships during Hughes’ reign.

In 1934 the club showed significant improvement from previous years to finish in sixth position. The club moved back into the finals for third placings in 1936 and 1937 and after being strong contenders for a few seasons, Melbourne finally won their third flag in 1939. The grand final win was a sweet one. The Demons drew away from arch rivals Collingwood after an even first half to win by 53 points.

In 1940 Melbourne recorded its second successive premiership with a 49 point victory over Richmond despite losing players to injury before the grand final. One of the team’s heroes was ruckman O’Keefe who shadowed Richmond captain Jack Dyer all day and somewhat limited his effectiveness. Norm Smith booted a record goal tally of 7 for a grand final in a dominant performance at full forward.

Melbourne’s domination of the competition continued in 1941 as the team made it a hat trick of flags with a comfortable 29 point win over Essendon. Despite fielding a depleted side, the Demons overcame hot weather and a blustery north wind as they bade farewell to coach Hughes with an emphatic premiership victory. The team opened up with all guns blazing as they blitzed the Bombers to lead by 57 points at half time and then coasted to victory.

Hughes was to return as coach twice again. Hughes returned as coach in 1945 and set about rebuilding the side after the Second World War. The team made significant headway in 1946 when it finished in second position. 1947 was a disappointing season and the team missed out on the finals.

Hughes brought out the best of veterans Smith and Mueller in 1948. Together with the Cordner brothers, Don and Denis, and promising youngsters, Bob McKenzie and Noel McMahen, they were prominent in the first-ever drawn grand final. Essendon’s atrocious kicking cost them the game as they could only score 7.27.69 to Melbourne’s 10.9.69. In the replay Melbourne easily defeated Essendon by 39 points and Hughes stepped down as coach on a winning note once more. This victory was a precursor of the enormous success the club was to have in the 1950s and early 1960s. His last appearance in the role came many years later in 1965 when he replaced Smith who was sacked for one week mid-season.