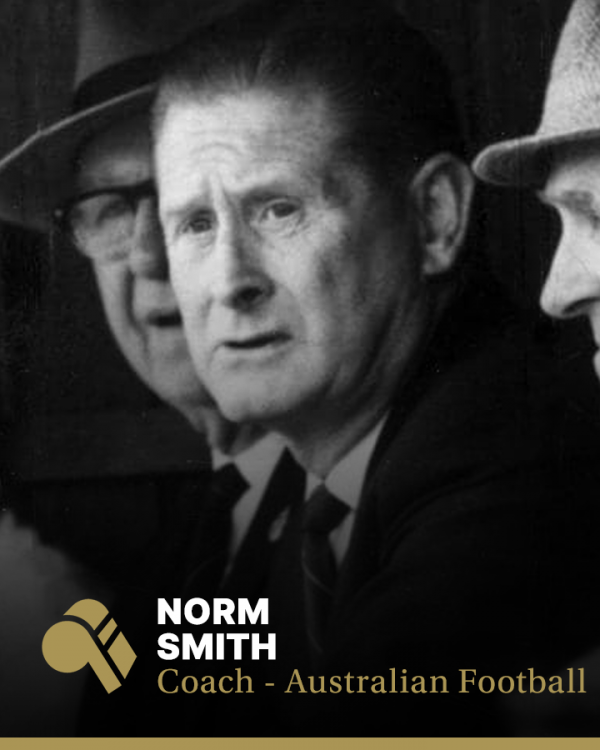 As a young man, he played cricket at district level and Australian football. He first played club football for Dennis in the sub-district competition and collected ‘a few welts across the ears’. Joining the Melbourne Football Club in the Victorian Football League (VFL), he was selected for the first XVIII in 1935.

A strong disciplinarian, Smith was known as the ‘Demon Dictator’ and the ‘Martinet of Melbourne’. His canniness and ‘stiff auburn hair’ earned him a further nickname, the ‘Red Fox’. He believed that the club came first and the player second, but had close-knit teams in Melbourne’s years of greatness. The development of the quicker, play-on style of football was largely attributable to him. Melbourne sides under Smith were fast, fit and accustomed to success. The crowds grew, with Melbourne-Collingwood games attracting record attendances (115,802 in 1956).

From 1964 tension increased between Smith and a number of influential figures at the club. One factor was the decision by a champion Melbourne player, Ron Barassi, to move to Carlton in 1965 as captain-coach. The Smiths had raised Barassi as a ‘son from the time he was 15’. Smith supported his aspirations and even offered to make way for him as coach of Melbourne. When Barassi struck out on his own, some Melbourne officials unfairly accused Smith of ridding himself of a potential rival. He was famously sacked as coach of Melbourne mid-season in 1965 after the side had a form slump – but was re-instated the next week after they lost again, however he never again enjoyed his old relationship with the club. Melbourne’s years of glory had passed.

Heart disease compelled Smith to resign from Melbourne in 1967. He recovered to coach South Melbourne from 1969 to 1972, taking the Swans to the 1970 finals, their first since 1945. Smith was planning to assist Barassi in coaching North Melbourne when his health again deteriorated.

When coaching, Smith dressed in a suit and tie (and sometimes a cardigan) on fine Saturday afternoons; he donned an old, crumpled raincoat in wet weather. With his beaky nose, furrowed brow and slicked-back hair, he could be both fiery and calculating. To him, teamwork was all. He firmly maintained that ‘weak men can’t win premierships’. Although he was renowned as a football orator and a stern taskmaster, he was a quiet and retiring man away from the field. Paradoxically, for one who played and coached largely for the love of the game, he did much to professionalise the sport. In 1979 the VFL instituted the Norm Smith medal, awarded annually to the best player in the grand final.

Smith was one of the inaugural inductees into the Australian Football Hall of Fame in 1996.