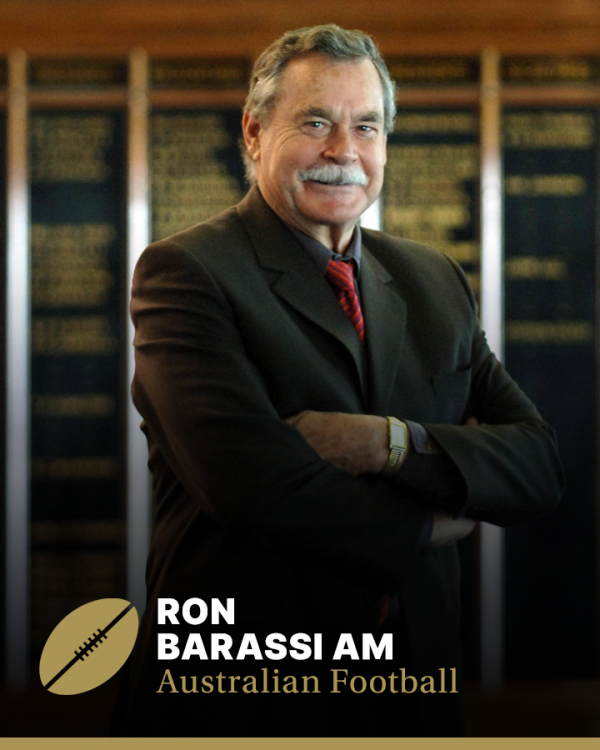 Ronald Dale Barassi was inducted into the Sport Australia Hall of Fame in 1987 as an Athlete Member for his contribution to the sport of Australian football and was Elevated as a  Legend of Australian Sport in 2006.

Barassi is a legend for many reasons; incredible player, revolutionary coach, enduring media personality. For more than 50 years he has been one of the most influential people in the game, and few can match the shadow he casts. As a player and coach, he took part in 17 grand final appearances for 10 premierships. In a playing career spanning from 1953 to 1969 Barassi played 254 games, and kicked 330 goals. Barassi coached over 500 games.

Even without meaning to, Barassi had changed the game without taking to the field. His father had been a premiership player at Melbourne, before being killed in action at Tobruk in World War II. Determined to follow in his footsteps at the Demons, Barassi Jnr had to bypass the zoning system of the day – which would have seen him sent to either Collingwood or Carlton.

To ensure he played with the Demons, Melbourne went to the VFL and successfully lobbied for a Father-Son rule. When the time came for Barassi to be signed up, Melbourne picked him up from Preston Scouts in 1952 and he became only the second player recruited under the new rule.

The club had gone to great lengths to recruit the young Barassi, and coach Norm Smith – who had played with his father – took him under his wing after his mother moved to Tasmania. Smith offered the 16 year-old use of his backyard bungalow, and looking back on the experience, Barassi believes that sharing Sunday roasts with one of football’s greatest brains was invaluable to his development.

Melbourne was a dominant force in the 1950s, and Barassi developed quickly into a talented footballer and fierce competitor. Making his senior debut at the age of 17 he soon became known for his strength and natural ability as a player and was revered as one of the most feared enforcers in the VFL. His efforts at ruck-rover paved the way for a new-style of quicker on-ball play. Barassi had eyes only for the ball, and used his tremendous strength to break through packs and create scoring opportunities.

After 204 games and 295 goals for Melbourne, a resurgent Carlton created a dilemma for Barassi in 1964. New president George Harris was desperate to have Barassi at Princes Park, and was willing to offer a lucrative contract if he would cross to Carlton as captain-coach.

Keen to test his skills as coach in a fresh environment, Barassi also knew that the new wage – unthinkably high in a time where amateurs were still common – could help with his children’s education. He subsequently joined Carlton in 1965, a decision which shocked the football world. While it might seem commonplace today, high-profile players leaving clubs for financial security was virtually unheard of at that time.

Barassi believes he made the right decision, though he was reluctant to leave a club for which he had so much feeling. Drawing from his own experience under Norm Smith, Barassi forced his squad to become more disciplined and committed to the club and their career. He preached and played a tough brand of football, and asked his charges to play a selfless, team-oriented style.

In the twilight of his own playing days, Barassi oversaw the emergence of a new era of stars that included names such as Alex Jesaulenko and John Nicholls, marking his evolution from courageous and commanding footballer to clever and creative coach.

In 1968, he guided Carlton to its first premiership in 21 years against Essendon, and in 1970, in front of the biggest ever VFL crowd, he conjured footy’s most famous comeback, as arch rivals Collingwood were run down after leading by 44 points at half-time.

After the 1971 season, having played 50 games (35 goals) and coached 147 games for the Blues, Barassi left to focus on his business career. But before Barassi’s playing days were over, he represented Victoria 19 times and was captain coach of the touring team to Ireland in 1967 and 1968. It was during the years 1956, 1958 and 1961 (captain) that he was also part of three Carnival Teams; years in which he was named All Australian.

Not long after leaving the Blues, he was lured by the prospect of coaching another struggling team in blue and white, North Melbourne. Taking over for the 1973 season, Barassi found North in much the same situation as Carlton had been eight years before. With a clear eye on success, administrators Allen Aylett and Ron Joseph had armed the Kangaroos with a new batch of stars.

Proven champions from clubs throughout the country, including Malcolm Blight, Wayne Schimmelbusch, Barry Cable, John Rantall, Barry Davis and Doug Wade were soon lured to Arden Street. However, it required a coach of Barassi’s quality to pull all the elements together into a winning formula.

Barassi didn’t disappoint, bringing a combination of tactical brilliance and ultra-disciplined coaching to the flagless Roos. Taking over the wooden spoon winners of 1972, he raised the team to sixth position the following year and led North to their first VFL premiership just two years later in 1975. North was runner up in 1976 and 1978.

The Kangaroos went on to win another premiership in 1977, but it very nearly wasn’t, as North Melbourne gave up a late lead against Collingwood in the second ever drawn VFL grand final. Within a week, Barassi had picked his side up from this disappointment to lead North to a memorable triumph. North Melbourne are the only club to have played in five successive finals.

For Barassi, his premiership victories at North rank with the epic 1970 grand final with Carlton against Collingwood as his finest coaching moments.

After coaching North for 198 games (129 wins, 66 losses, 3 draws), Barassi returned to Melbourne in 1981, which had fallen on hard times. The football side of the club was in disarray, so with long-term under-19 coach Ray “Slug” Jordan, Barassi set about building morale from the junior ranks upwards.

The under-19’s made three straight grand finals and won premierships in 1981 and 1983, but the senior side couldn’t make the same impression. However, Barassi clearly laid some foundations for what would become a revitalised Melbourne side.

Having coached his beloved Demons in 110 games (33 wins, 77 losses), Barassi then turned his signature determination to new business interests and media commitments, all of which thrived. However, football’s lure proved too strong, and in 1993, he returned to coaching as he took over the rock-bottom Sydney Swans.

His status as an AFL legend, savvy media ability and irrepressible coaching record made him uniquely qualified to carve out a space in the rugby heartland. In his three seasons in Sydney, he helped put both AFL football and the Sydney Swans on the map in the Harbour City. He coached the side in 59 games, recording 13 wins and 46 losses and became a board member of the Swans in 1997 to 2003.

Barassi now occupies himself with a wide variety of business, media and personal interests, which includes a prolific public-speaking career and an on-air role at Fox Footy. Unsurprisingly, he’s still on the speed dial of every major football organisation as his opinions and experience are highly valued and always in demand.

Footballers are often branded heroes or villains according to their team colours, but Barassi is loved and respected by all. He has truly become the father of the modern game, and will always be remembered as one of the all-time greats.

1978: Made a Member of the Order of Australia (AM)
1979: Awarded AFL Life Membership
1996: Became an inaugural inductee of, and elevated to Legend status in, the AFL Hall of Fame
1996: Named in the AFL Team of the Century
2000: Awarded the Australian Sports Medal
2007: Named as Coach of the VFL/AFL Italian Team of the Century
2009: Named Victorian of the Year
2013: Received a Commendation for Brave Conduct
Life Member of the Carlton, Melbourne and North Melbourne Football Clubs