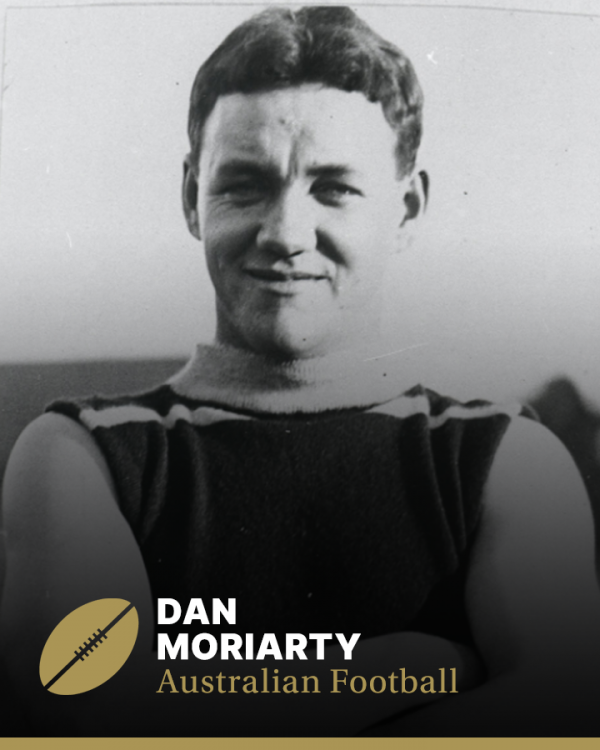 Dan Moriarty has often been described as South Australia’s greatest footballer between the two World Wars. A champion center half-back with an ability to fly high and drop-kick the ball long distances, he won three Magarey Medals (South Australia’s equivalent to the Brownlow Medal) in succession, in 1919 (his first season of league football), 1920 and 1921. To this day he is the only player to have won three consecutive Magarey Medals. He was also the first player to win the Knuckey Cup for the team’s (South Adelaide Football Club) best and fairest, which was first presented in 1923.

Ironically, Dan had great trouble in gaining selection with any team before he was 20 years of age. Persuaded to have a kick with South Adelaide by the 1915 Magarey Medallist Frank Barry, a shy young Dan played a few games for South Adelaide’s association side before the competition wound up as the First World War began. His early games for Victoria Parks were held in the center of the racecourse.

In 1917 and 1918 he played in the patriotic league with South Adelaide, establishing a reputation as a defender. When he finally reached senior football, he wasted little time proving his quality.

In his first season of senior football in 1919, Dan captained South Adelaide in his first match in the absence of Steve McKee, played two interstate matches, and won most of the press awards as well. Dan represented South Australia until 1925, in every year of his brief but explosive 97 game career. He played 22 consecutive representative games until his retirement in 1925, including the Perth and Hobart carnivals of 1921 and 1924.

At 178cm and 76kg, he was an extremely fit player, and missed only one game for South Adelaide in seven seasons.

The key to much of his success as a strong rebounding centre half-back was not only his close marking and vigorous play, but his anticipation and his reading of the play down the ground, and his unwillingness to relinquish the ball unless he could be sure of disposing of it to the team’s advantage.

Moriarty is one of the initial inductees into the AFL Hall of Fame.