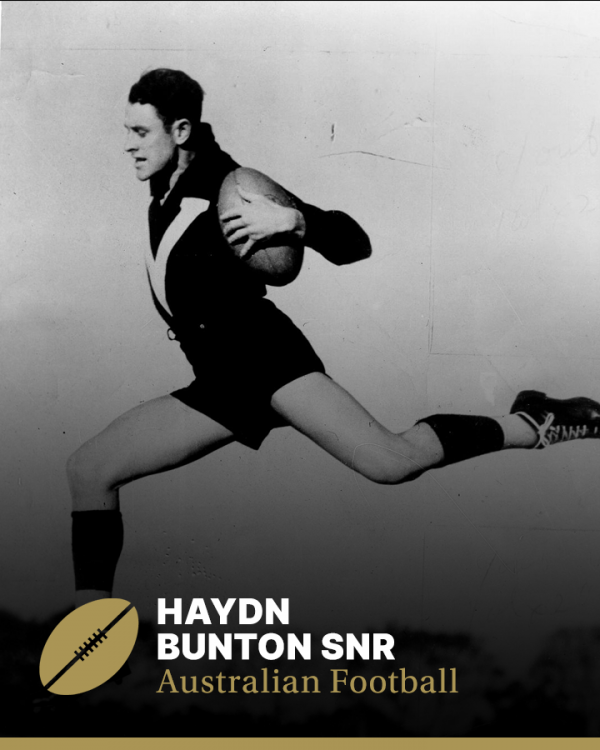 From an awards perspective, no player has to this day achieved what Haydn Bunton did in Victoria and Western Australia. He is the first and only player to have won both the Brownlow Medal and the Sandover Medal three times, showing his domination of the game at the highest level.

Born in Albury, New South Wales, Bunton made his debut for the Fitzroy Lions in 1931 at the age of 19, immediately making an impact on the then VFL. A champion rover who delighted spectators with his fluidity and grace, as well as his pioneering use of constructive handball, Bunton won the Brownlow Medal in his first two seasons in the competition, before adding a third in 1935. He was also named ‘Champion of the Colony’ in 1932, and was runner-up for the Brownlow in 1934, as well as representing Victoria on 12 occasions throughout his time at Fitzroy.

After seven seasons with Fitzroy, Bunton transferred to Subiaco (Perth) in 1938, where he captain-coached the side. He won the WAFL’s equivalent of the Brownlow – the Sandover Medal – in his first season, and went on to win it two more times, in 1939 and 1941. With his career drawing to a close, he moved to Adelaide and played with Port Adelaide in 1945, then turned his hand to field umpiring in 1946, before coaching North Adelaide in 1947. Like so many of his era, his playing career was curtailed by wartime service.

Tragically, Bunton was killed in a car accident in 1955, aged just 44.