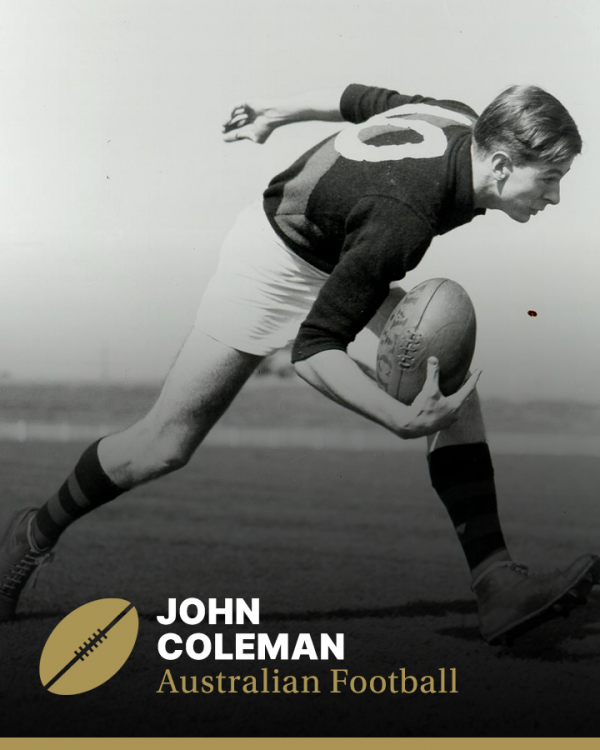 One of the greatest players to ever play for Essendon – Coleman burst onto the football scene in 1949. Fans were amazed to see him soar high over packs for spectacular marks, and they flocked to Essendon to see their idol in action. He was an overnight football sensation and one of the greatest goal kickers seen in Australian football.

In his first game in 1949, at the age of 20, he stunned the football world, kicking 12 goals against Hawthorn, to equal Ted Freyer’s opening round record set in 1935. He went from success to success and became the first player to kick 100 goals in his first season. He broke Essendon’s goal kicking record of 70 goals held by Tom Reynolds in 1939.

Coleman also won Essendon’s best and fairest award in 1949 and was selected in the state side in his first year. He was the leading VFL goal kicker again in 1950 with 120 goals and his four goals in the 1949 grand final spearheaded the premiership win. Essendon won the premiership again in 1950.

He was a sensational marker, quick, courageous, and a great team player. His influence was so profound, he was one of the 12 original legends in the AFL Hall of Fame, and was named full forward in the AFL Team of the Century ahead of Gordon Coventry (306 games, 1299 goals). The Coleman medal was struck in his name and is awarded to the AFL player who kicks the most goals in a home and away season, it was first awarded to Michael Roach of Richmond in 1981.