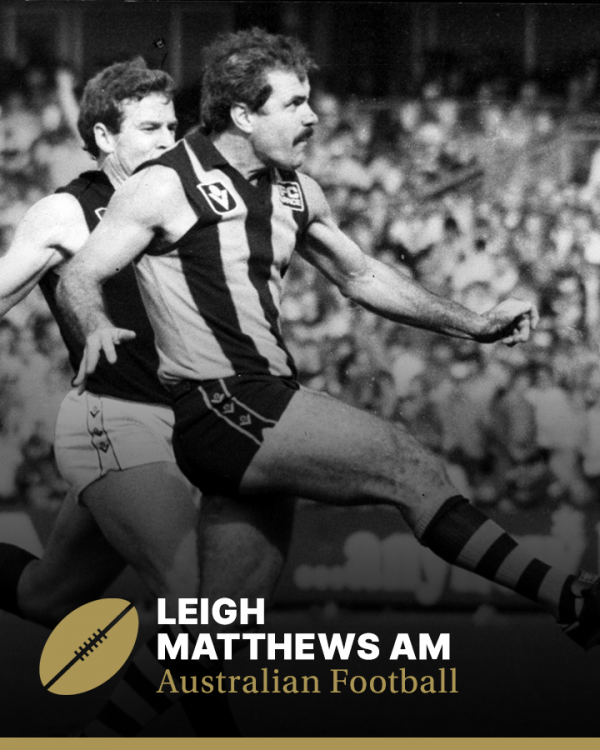 Leigh Matthews was inducted into the Sport Australia Hall of Fame in 1994 as an Athlete Member for his contribution to the sport of Australian football and was Elevated as a Legend of Australian Sport in 2010.

Matthews’ career, as both player and coach, has been crowned with success and legendary status in the game in which he continues to play a prominent role. From the time of his senior debut in 1969, his has been an inspirational story of determination and achievement.

Originally recruited from Chelsea in Melbourne’s bayside suburbs as a 17 year old, Matthews played 332 senior matches with the Hawthorn Football Club from 1969 to 1985. Solidly built, he made his mark as a rover and forward, setting up a formidable combination with Peter Crimmins in his early years. Matthews was renowned for his fierceness, skill and absolute commitment. As captain of Hawthorn from 1981 to 1985, he led the team to premiership victory in 1983, after having already played in the 1971, 1976 and 1978 flag sides.

Lou Richards gave Matthews the nickname ‘Lethal’ Leigh. According to Matthews, his target was always the ball, but players who got in his way found out why they called him ‘Lethal’. He was part of a footballing family, and his brother Kelvin (built on similar lines) played 155 games at Hawthorn and Geelong and made the state team.

In the 1973 season Matthews won Hawthorn’s Leading Goal Kicker for first time in his career by kicking 51 goals in 19 games. In that season Matthews played what many regard as the greatest game ever played. At quarter time, Matthews had only one goal, and the Hawks had a lead of only seven points over Essendon. These statistics gave little warning of the incredible 11 goals that ‘Lethal’ Leigh would kick by game’s end – a record for a rover – in the Hawks’ 27.8 (170) to 15.12 (102) win. Matthews also finished with 38 kicks for the game.

In recognition of the fairness that accompanied his tenacious approach to the game, Matthews polled 202 Brownlow Medal votes over the course of his career, finishing third in 1973 and 1982. He is the the highest polling player never to win a Brownlow medal and is third on the all-time list of vote-pollers.

After spending time in the media, Matthews then moved to Brisbane in 1999 to coach the Brisbane Lions. In his first year of appointment he took the team from 16th in 1998 to 4th in 1999, in one of the greatest coaching turnarounds in the history of football. The club continued to do well in 2000, finishing 5th on the ladder with 13 wins and 11 losses. In round 10 of 2001 the Lions beat premiership favourites Essendon by 28 points. This was the start of a 16-game winning streak that extended to the grand final, a feat which had only been accomplished once, by Carlton in 1995. Matthews followed up by guiding the Lions to the 2002 and 2003 premierships, as the club became the first to “3 peat” since Norm Smith’s Melbourne side of the 1950s. In 2004 they were beaten by Port Adelaide in the grand final.

1982: Named VFLPA MVP (later named the Leigh Matthews Trophy)
1982: Named Australian Football Media Player of the Year
1996: Became an inaugural inductee of, and elevated to Legend status in, the AFL Hall of Fame
1996: Named in the AFL Team of the Century
2006: Named as Coach in the Brisbane Lions Team of the Decade
2013: Named in the Hawthorn Football Club team of the Century
Life Member of the Brisbane, Collingwood and Hawthorn Football Clubs
Member of the Brisbane, Collingwood, Hawthorn (Legend) and Queensland (Legend) Halls of Fame