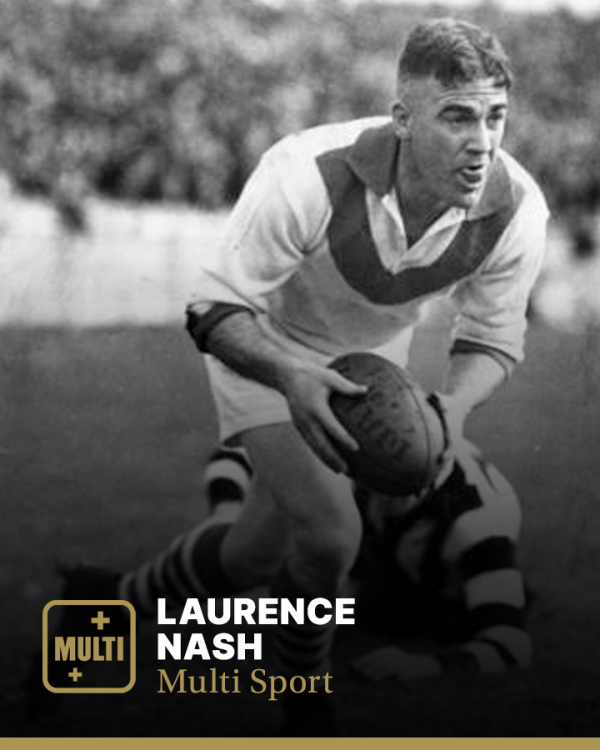 Laurence Nash was inducted into the Sport Australia Hall of Fame in 2012 as an Athlete Member for his contributions to the sports of Australian football and cricket.

‘Laurie’ Nash remains one of an elite group of athletes who have played both Australian football (VFL/AFL) and cricket at the highest level.

It was in his blood: His father Robert had been a prominent Australian Rules footballer in the early years of the 20th Century and as a cricketer had played for a country team against a touring Marylebone Cricket Club side in 1921. Young Laurie Nash was playing first grade cricket for Fitzroy at the age of 17 before the family moved to Tasmania. There club success quickly earned him State selection to play against Victoria and he quickly caught the eye of the national selectors

He made his cricket debut for Australia in 1932 against South Africa, beginning his career with the impressive bowling figures of 4/18 in the first innings and 1/4 in the second.

Despite this he was not selected for Australia again until the final -and deciding — Test of the 1936-7 Ashes series. Then in the post ‘Bodyline’ controversy there was considerable concern about his aggressive bowling style but he took 4/70 in the first innings and 1/35 in the second. He made 17 runs and took several spectacular catches.

His outspoken, sometimes combative, personality was said to be a factor in limiting his Test career in an age when these traits was not prized, but in two Tests he took 10 wickets at an average of 12.80.

Nonetheless his combined talents as footballer and cricketer enabled him to become a full time professional sportsman, one of very few of that era.

Nash moved to Melbourne in 1932 and the following year joined South Melbourne VFL club. He was an instant success and was one of the star players in the club’s grand final victory that year.

He was selected at centre half-forward in the Victorian team to play South Australia in 1934, bit moved to full forward in the second quarter and kicked an astonishing 18 goals. Extraordinarily, in his next interstate game, against WA the following year, he was selected as a defender!

His VFL career was controversially interrupted in 1938 when he switched – without a clearance – to the rival VFA competition, where he captained Camberwell in 78 games across four seasons, kicking 418 goals.

After Japan’s entry into the war he joined the Army, refusing a safe role in physical training and seeing extensive action in New Guinea and the Pacific.

He rejoined South Melbourne in 1945 and despite his age and the legacy of many injuries, he again headed the club goal-kicking. He retired as a player from VFL football at the end of that season but returned to coach Souths for one season in 1953 with a coaching record of nine wins, nine losses.