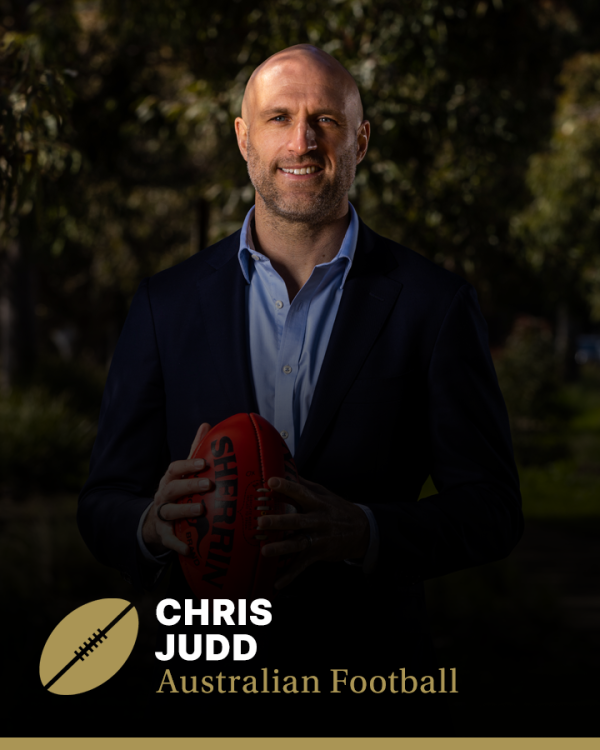 Chris Judd was inducted into the Sport Australia Hall of Fame in 2022 as an Athlete Member for his contribution to the sport of Australian football.

Chris Judd was one of the most decorated and dynamic footballers of the modern era, with his explosive bursts and midfield craft setting him apart from many contemporaries across 14 seasons.

He had the distinction of not only captaining two clubs – West Coast and Carlton – but also winning a Brownlow Medal at each of them – with the Eagles in 2004 and the Blues in 2010.

A six-time All Australian, including one as captain, and a five-time club champion – two at West Coast and three at Carlton – Judd would go on to play 279 games and kick 228 goals in a career that spanned from the 2001 draft until his final game in Round 10, 2015.

His capacity to reach peak performances in games that mattered was highlighted by his Norm Smith Medal win in a losing team in 2005 before he captained the Eagles to the 2006 flag.

Judd was inducted into the Australian Football Hall of Fame in 2021.

Chris Judd was the template from which most modern AFL midfielders modelled themselves on.

His breakneck speed from stoppages, his intense running capabilities and his unrelenting, competitive edge saw him become one of the most celebrated footballers of his age.

Judd was selected as pick three in the 2001 national draft, which was so strong it became known as ‘the super draft’, with West Coast selecting him after Hawthorn and St Kilda had already chosen Luke Hodge and Luke Ball.

Those three players would be compared for the remainder of their stellar careers, with Judd stamping his impact on the game almost from the outset, debuting with 19 disposals and a goal as a late inclusion against Collingwood in Round 2, 2002.

He had played the previous week in his one and only WAFL game, with his coach saying after the game: “That’s the last time you’ll see Chris Judd wearing an East Perth jumper.”

Judd’s watershed moment came in his 34th game – in his second season. He went from promising young talent to shooting star, kicking five first-half goals against Brisbane at the Gabba.

His dominance saw him win the AFL’s most prestigious individual award, the Brownlow Medal in 2004, just 12 days after his 21st birthday. He polled in 13 of his 22 games that season, with his total of 30 votes seven clear of his nearest rival.

The following year he added to his tally of individual honours, adjudged as the Norm Smith Medal winner in West Coast’s heartbreaking four-point loss to Sydney. He had 29 disposals and 11 clearances to become the fourth player in VFL-AFL to win the award in a losing team.

Judd cut a shattered figure on the podium that day, but in his speech he promised Eagles fans there would be “better days ahead”, which proved to be the case exactly 12 months later.

Having inherited the West Coast captaincy when Ben Cousins was made to relinquish the position in early 2006, Judd played a significant role for the Eagles that year. He won a second club best and fairest and was a key player in the club’s one-point premiership win over Sydney.

Judd’s decision to return home to Victoria at the end of the 2007 season led to one of the most seismic trade moments of this century.

He met with four clubs – Carlton, Collingwood, Melbourne and Essendon – before choosing the Blues as his preferred option, believing they “had the potential to replicate West Coast’s journey.” It wasn’t to be, despite his tireless efforts to try and lift the Blues towards success.

While the trademark of the Eagles’ Chris Judd was his burst running and explosive speed, the Blues’ version changed his craft to a clearance-winning, inside midfielder, with his speed blunted by a number of injuries he encountered. But he was no less effective and no less watchable, adapting and evolving to the role his team needed him to play.

Judd’s high point at Carlton from a team perspective came in two significant elimination finals wins, knocking off Essendon in 2011 and Richmond in 2013.

Great careers don’t always end the way they should, evidenced by Judd’s 279th and last game of AFL football. Twenty minutes into the opening term of the Round 10, 2015 clash with Adelaide, his left knee buckled under him, rupturing the anterior cruciate ligament.