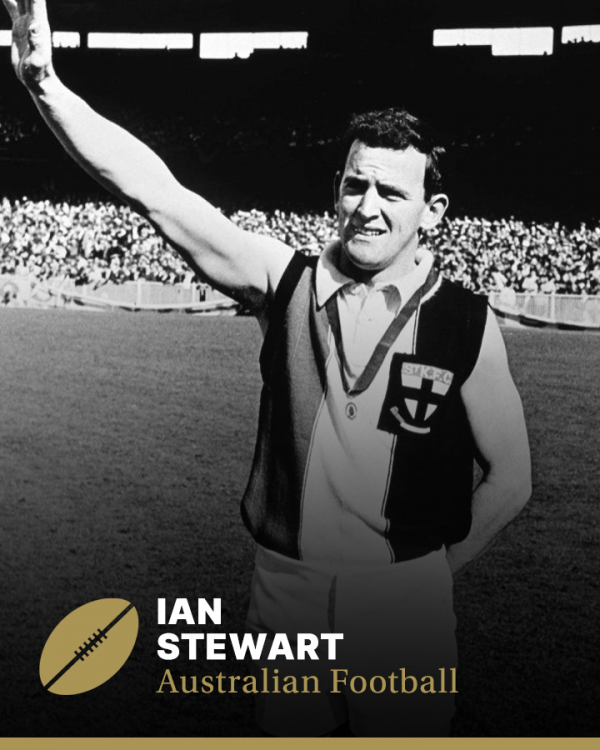 Ian Stewart was a football genius. A star centreman, his precision passing, ball and evasive skills, spectacular marking, his ability on both sides of his body, and pace made him unstoppable, dazzling football fans and the opposition. He is one of four triple Brownlow Medallists.

When a young Ian Stewart first played football for Hobart, few, including him, were to realise what was to lie ahead. While at High school, Stewart had two seasons with Macalburn in the State School Old Boys. Here he tasted premiership success in 1960 and won an association best and fairest in 1961 before graduating the following year to Hobart seniors.

As a 16 year old, Stewart played in Hobart’s 1962 TFL final series. It was at a Victoria versus Tasmania match in 1962 when Geelong champion Alistair Lord lined up on the 17 year old Ian Stewart in the centre. He had been chosen to represent Tasmania in only his first season with Hobart. After only 13 senior games with the Tigers, Stewart made the move to the VFL, recruited to St Kilda for the 1963 season.

When Stewart joined the Saints, the shy young player went out and bought himself a club guernsey rather than ask for one. He was delighted to be playing with his idols Darrel Baldock and Verdun Howell. He suffered a bad knock in his first game but was able to battle on. He soon moved from the wing to take over the centre role from Lance Oswald. Other clubs became aware of his great talent and he became a frequent target. The secret of his game was immaculate balance and perfection in foot passing. Whether cornered in a pack or clear of his opponents, Stewart was always able to spot a teammate from a distance and land a pass on his chest. Most of his passes found his skipper and fellow Tasmanian Darrel Baldock with whom he formed one of football’s great partnerships.

The Saints made the finals in Stewart’s first year but were bundled out in the first semi-final. They failed to make the finals the following year. St Kilda made the grand final in 1965 but were easily defeated by Essendon.

Stewart however showed what a class act he was by winning his first Brownlow on countback from North Melbourne’s Noel Teasedale in 1965. When he was told he had won the Brownlow his response was “I don’t deserve it. There are far better players than me who should have received this great honour.”

The following season 1966 was a stellar year for St Kilda and Stewart. Not only did the Saints win their first and only premiership but Stewart proved the previous years Brownlow success was no fluke by easily beating Carlton’s star ruckman, John Nicholls, in the count.

He captained St Kilda in 1969 and after an unsettled year with the club in 1970 he shocked the football world in 1971 by swapping with Richmond’s Bill Barrot in one of the most talked about transfers in league history. This controversial deal saw Barrott’s career decline but Stewart gained a new lease on life.

In his first season with the Tigers in 1971, Stewart again won the Brownlow to become only the fourth player in history to win the coveted title a record third time. He combined brilliantly with another Tasmanian, Royce Hart. The following season saw the Tigers go down in a goal kicking shootout against Carlton. Because of injury Stewart started the game on the bench.

In 1973 the Tigers reversed the result to completely outclass Carlton to win by five goals. Stewart was unanimously voted best on ground. Injury stifled Stewart’s career the following year, before a half hearted comeback in 1975 saw him finally retire as a player. Following his retirement Stewart coached South Melbourne (1976, 1977, 1979-1981) (111 games, 49 wins, 60 losses, two draws) where he took them to the finals for the first time in seven years in his first season. He joined Carlton in 1978 (three games, one win, two losses) as coach but retired after six weeks following a minor heart attack. The following season he rejoined South Melbourne. When he retired from coaching he returned to St Kilda in a managerial role.