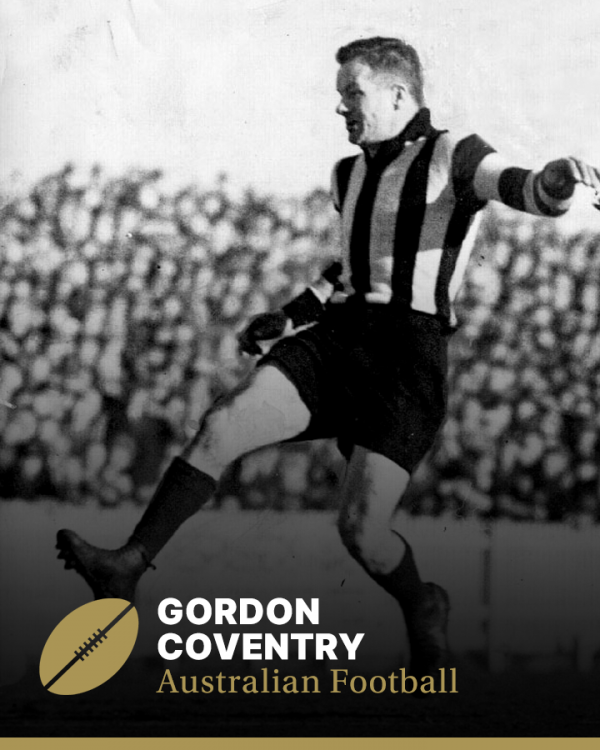 Nicknamed ‘Nuts’, Coventry began his career as a teenager at Victoria Park. A magnificent flyer, Coventry kicked his 1299 goals in 306 matches (a club record that stood for 60 years) for an average of 4.24 goals per game. In addition he landed 100 goals for Victoria in 23 interstate matches.

He played for Collingwood from 1920 until 1937 and was a member of the premiership teams of 1927, 1928, 1929, 1930 and 1935. The 1929 Collingwood team was captained by Syd Coventry and coached by the legendary Jock McHale, Albert Collier won the Brownlow medal and Gordon Coventry was the leading goal kicker. The team went through the home and away season undefeated.

For every season Coventry played he would nearly always produce something extraordinary. In 1929 Coventry kicked 17 goals against Fitzroy and 16 against Hawthorn. He was Champion of the Colony and the club’s Best and Fairest in 1933. Six times he was the league’s leading goal kicker (1926-1930, 1937) and sixteen times the club’s leading goal kicker (1922-1937). Coventry kicked more than 100 goals against every VFL club with the exception of Footscray. In thirteen consecutive seasons he kicked 50 goals or more and was the first man to kick more than 100 goals in a season.