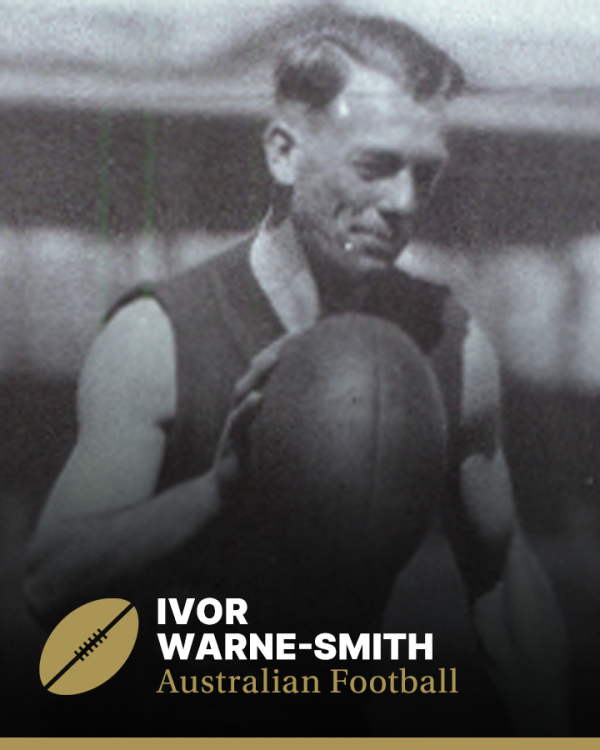 Ivor Warne-Smith was one of the comparatively few Sydney born footballers to reach the top of the Victorian Football League competition. He was born in 1897 and grew up in the Sydney harborside suburb of Lavender Bay, before moving to Melbourne to complete his education at Wesley College.

He served in the First World War, then joined Melbourne Football Club in 1919 but after only eight matches moved to LaTrobe, Tasmania, to manage an apple orchard. He went on to play football with Latrobe in North-Western Tasmania, and led them to three grand finals in three years with two premierships, and was appointed their captain-coach in 1922. In 1924, he won the Cheel Medal, for being the North-WesternUnion’s (Tasmania) best and fairest player. He also won two best and fairest awards with Latrobe. He coached during this period and along with people like “Checker” Hughes, Bill Mayman and Harry Lee, is credited with having contributed greatly to improvement in Tasmanian football standards.

At the end of 1925, he was chased by Richmond to return to playing VFL football, but found that he was tied to Melbourne. So, at the age of 27, Warne-Smith started playing again for the Club. Out of touch with VFL standards, he did not take long to demonstrate what a force he would have been in league football in his early twenties. He was capable of playing all around the ground, although was generally considered as being at his best in the centre.

Warne-Smith’s Saturdays began before sunrise, shoveling coal at Spencer Street station. After a five-hour shift, he would then head to Young and Jackson’s hotel for a few quiet beers with work mates before strolling over to the MCG with his playing kit.

In 1926, Warne-Smith won the Brownlow Medal in Melbourne’s premiership year, with nine votes, four ahead of his nearest rivals. In 1927, he became Melbourne’s vice-captain, and in 1928, was appointed captain-coach of the side. In that year, he became the first player to win the Brownlow Medal twice. Warne-Smith retired as a player after the 1931 season but remained as non playing coach in 1932. However, he was re-introduced as a player in 1932 due to the side being decimated by poor form and injury, taking his career record to 146 games and 110 goals. This led to the unusual situation of the coach playing, but not captaining the side. He represented Victoria from 1926 to 1929 and was captain in 1928 and 1929.

He served in the Second World War, after appealing against a disbarment because of his age. Although in his forties, he saw active service as an infantryman in the Middle East and the Pacific. Upon return from the war, he became Chairman of Selectors at Melbourne in 1949, going on to work closely with champion coach Norm Smith. He held his position until his death in 1960, and was an integral part of the side’s success throughout this era.

Warne Smith was inducted into the AFL Hall of Fame and is part of the Melbourne Football Club Team of the Century named in 2000 as centre half forward.