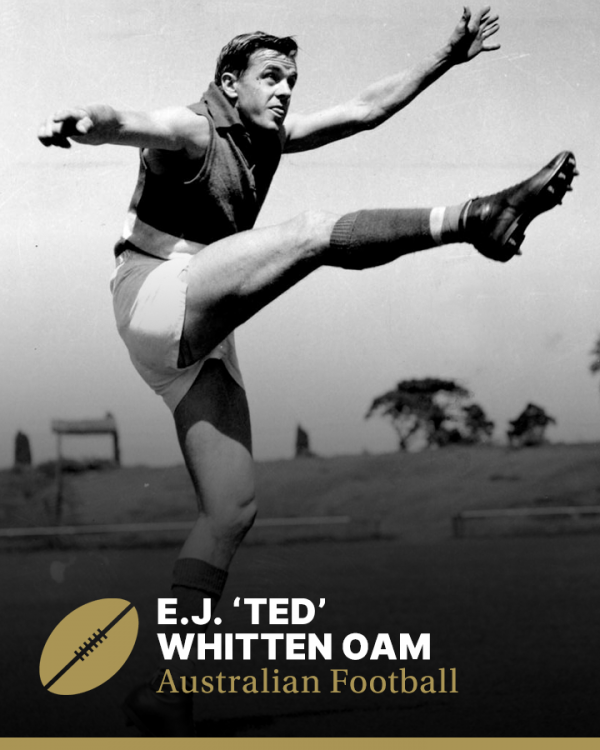 Edward James (E.J.) ‘Ted’ Whitten OAM was inducted into the Sport Australia Hall of Fame in 1985 as an Athlete Member and elevated to Legend of Australian Sport in 1995 for his contribution to the sport of Australian Football.

Whitten played his very best football as a key position player, either at centre half forward or centre half back. Described as a prodigious kick, a flawless mark, and as having unequalled ground and hand skills, he played 321 VFL games for his beloved Footscray between 1951 and 1970 (a record at the time which stood for almost a decade). He was dubbed ‘Mr Football’ by Ron Barrassi, another legend of the game because of his extraordinary skill and all round ability.

His debut in 1951 is part of football folklore. Opposed by renowned hard man Don ‘Mopsy’ Fraser of Richmond, the young Whitten politely offered his hand prior to the opening bounce only to receive a sharp kick in the ankles in return. Undeterred, Whitten goaled after marking early in the first term, which did not go down well with ‘Mopsy’ whose retaliation this time was even more pronounced – Whitten had much to reflect upon that night as he lay in his hospital bed!

With superb all round skills, the extraordinary talent of being able to kick equally well with his right and left foot, he is credited with inventing the ‘flight pass’, a form of handpass in which the ball was ‘slapped’ with the palm of the hand as the elbow quickly extended, enabling the ball to be passed quickly in any direction. It proved so successful that other clubs questioned its legality and it was later banned. He was one of few football players to have the ability to play any position on the field. Whitten was regarded by his contemporaries in the 1950s and 1960s as the greatest naturally talented player of his era.

Aside from participating in Footscray’s famous 1954 premiership win, Whitten did not enjoy much success at club level during his career. His volatile personality and fondness for back-chatting meant that he seldom fared well with the umpires when it came to Brownlow votes: equal 3rd, half a dozen votes off the pace, in 1959 was his best effort.

This perhaps in part explains his excessive partiality for interstate football – a predilection all the more remarkable when you bear in mind that many Victorians at the time regarded the interstate arena as redundant given the VFL’s unarguable supremacy. Whitten, however, liked nothing better than to remind the other states of that supremacy, a feat he achieved in 27 of the 29 interstate matches he played, being captain coach of the ‘Big V’ on two occasions. He was a Victorian selector from 1983 to 1994 and chairman of selectors from 1987 to 1994. So fanatical was Whitten’s devotion to interstate football, both during and after his playing career, that to many his name is synonymous with the big white V. He was often featured promoting the Victorian team with his saying “stick it up em”. He was also an All Australian selector from 1991 to 1994.

He worked as a football commentator on television throughout the 1970s and as a radio commentator in the latter part of his life.

In 1995, Whitten went public with the announcement that he was suffering from prostate cancer. During a State of Origin game only weeks before his death, Whitten, suffering from blindness due to the cancer, was driven around a lap of the MCG, with Mariah Carey’s “Hero” being played. He received a standing ovation from the crowd, most of whom were too young to have ever seen him play in person. This event was polled as the most memorable football event by The Age. After his death, Whitten’s son, Ted Whitten jnr began the EJ Whitten Legends Game in memory of his father. The game is a charity match to raise money for prostate cancer research.

Whitten lost his battle with cancer in August 1995. Such was his popularity he was given a state funeral, had a bridge named after him (EJ Whitten Bridge on the Western Ring Road) and a statue erected at the Bulldogs former home ground, Whitten (Western) Oval in west Footscray.