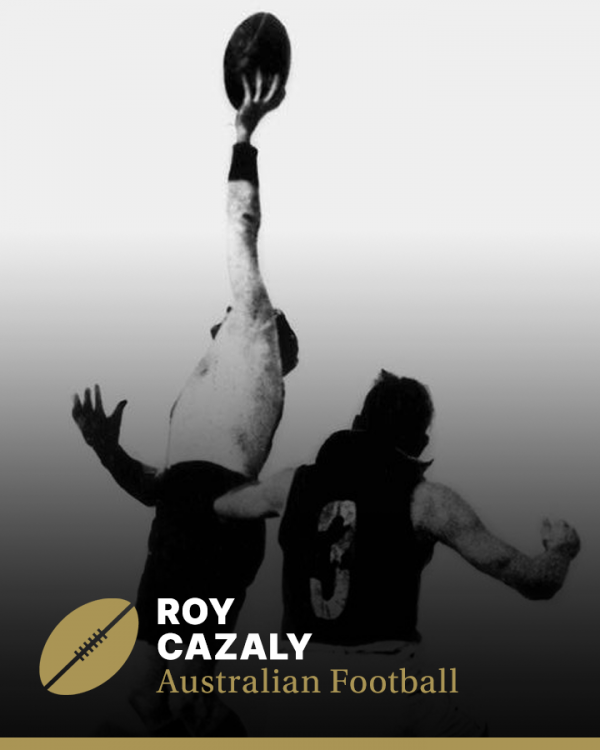 Perhaps more than any other player Roy Cazaly symbolises legend status. He is without doubt one of the best known names the game has produced.

His career spanned five decades, during which he played 429 senior matches including 212 in the VFL and 32 state matches for both Victoria and Tasmania.

Roy Cazaly was a fitness fanatic before his time, he did not smoke, drink or eat fried food. He started playing league football for St Kilda in 1911 in a match against Carlton. Cazaly played 99 games for St Kilda from 1911 to 1920. During his league career his enthusiasm for the game saw him take on numerous coaching roles around Victoria including Camberwell Juniors in 1918, the South Melbourne District Wednesday Competition in 1919 and the Warrnambool Wednesday Competition in 1921.

At the age of 27, he was voted champion of the 1920 season and also captained the Saints. However at the end of the season and after 99 games with St Kilda, Cazaly was traded to South Melbourne in 1921 after being refused a clearance to Carlton.

In his first season with the Swans he topped the club goal kicking with 19. He became coach of the Swans in 1922 and also topped the goal kicking again with 28, playing with them until 1927, with a year’s break in 1925. He won the club’s Best and Fairest award in 1926.

Cazaly added to his natural leap by controlling his breath. He could take a fingertip mark, turn a complete circle, land and keep running without missing a single step. His aerobatic performances inspired the term “Up There Cazaly”, a phrase that would be shouted by teammate Fred “Skeeter” Fleiter when he wanted Cazaly to go for a mark. Along with Mark “Napper” Tandy and Fleiter, Cazaly made up a fearsome ruck combination for the Swans. Cazaly developed his leap by jumping for a ball strung up in a shed at his home, and by taking a deep breath as he ran for the ball. Cazaly was certain it was his breath control that gave him the extra height, often another two feet.

His retirement was short lived. In 1942 and 1943 he nearly helped Hawthorn into the final four of the VFL and was responsible for changing the team’s nickname from the insipid “Mayblooms” to the more fearsome “Hawks”. He then returned to Tasmania for another minor coaching role before ‘retiring’ again.

His two year retirement had him itching to get back into it again so back he went to South Melbourne in 1947 as assistant non-playing coach. In 1948 he took on another minor coaching position in Tasmania before retiring again in 1951.

In his hey day Cazaly could punt or drop kick 70 yards with tremendous accuracy and he took a special delight in the running drop kick. He taught many youngsters to “fly” his way, to mark from behind or sideways and to become evasive, fast and accurate.

He was skilled at cricket, rowing, boxing and swimming and was an accomplished pianist.