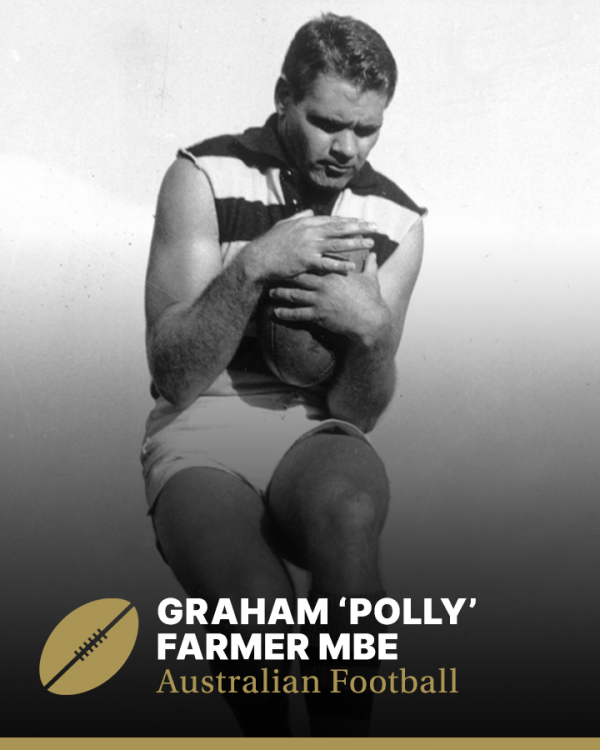 Perth born Graham ‘Polly’ Farmer was one of the finest players and most effective ruckmen to ever play Australian football, becoming a legend of the game in both Victoria and his native Western Australia.

In a playing career crossing three decades, Farmer played 356 senior games at both VFL and WAFL level. His first outing was as an 18 year-old ruckman in 1953 for East Perth, and his last in grand final victory in 1971 for West Perth. In between, he dominated the game at its highest level as arguably the VFL’s, dominant ruckman in his time with Geelong.

Naturally, this attracted the attention of VFL recruiting scouts, and it was not long before Farmer was heading east to the home of football, joining VFL club Geelong. He played 101 games for the Cats between 1962 and 1967, captaining them in his last three seasons. In 1963, he was instrumental in taking Geelong to premiership glory, and was named as the side’s Best and Fairest, an honour that he also received in 1964.

Farmer was renowned for his attacking tapouts, and constructive use of handball, as well as his outstanding leadership and ability to overcome injury, which saw him become one of the giants of the competition and famed for his battles with other greats, particularly Carlton’s John Nicholls. In 1968, he headed back west, taking over as captain-coach of West Perth and steering them to a premiership in 1969. He repeated this feat in 1971, further confirming his standing as a leader of the game on a national stage.

Farmer then returned to Victoria, taking on the role of coach of Geelong from 1973 to 1975, before again returning to Western Australia -this time as coach of East Perth in 1976 and 1977. In the latter season, he also coached Western Australia’s first State of Origin side to success over Victoria at Subiaco.

Throughout his career, Farmer was involved in ten grand finals, and was part of six premiership teams. He was runner-up to Bob Skilton in the 1963 Brownlow Medal count, and was named in the All Australian teams of 1956, 1958, and 1961. In 1971, Farmer was awarded the Medal of the Order of the British Empire (MBE), and in 2001, was awarded a Centenary Medal for his services to the game.