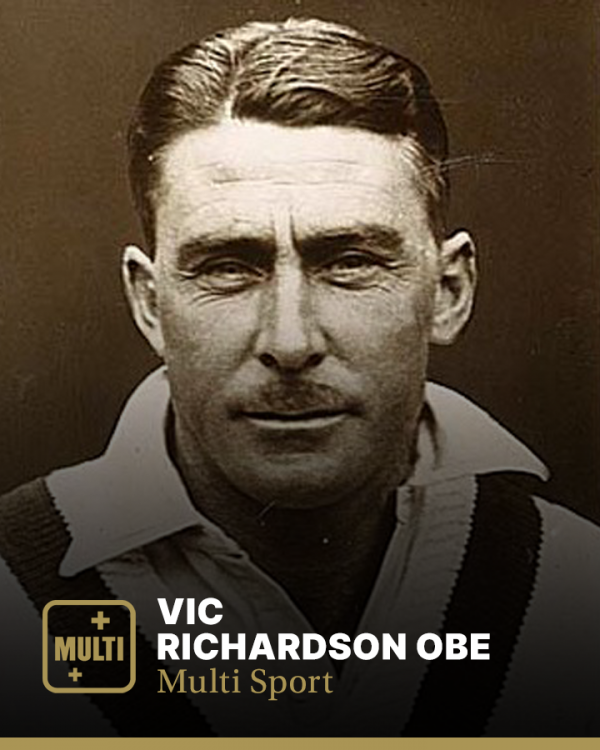 Victor Richardson, generally regarded as the greatest Australian sports all-rounder since the legendary ‘Snowy’ Baker, devoted most of his abundant energy to sport. Besides taking part in 19 Test matches between 1924 and 1935, he represented his county at baseball and played for South Australia in cricket, baseball and golf. He also won a state tennis title, was prominent at lacrosse and basketball and was a first-rate swimmer.

A right-hand batsman, his early cricket coaching was from Davis Cup star Adrian Quist’s father, Karl Quist, who played cricket for New South Wales, South Australia and Western Australia. Richardson entered state cricket in 1919 and toured New Zealand in an Australian second team in 1921. Selected in the 1924/25 Tests against England, he made his largest Test score, 138 against Arthur Gilligan’s English side in Melbourne, during which he achieved the rare feat of hooking Harold Larwood, the Nottinghamshire fast bowler, for six. He was captain of South Australia from 1921, and of the Australian team in New Zealand in 1928, Test vice-captain against England in 1930 and 1932/33, and Australian captain in South Africa in 1935/36. He also led Australia on a North American tour in 1932.

Almost six feet (183 cm) tall, erect and confident, with light blue eyes and thin moustache, Richardson was an impressive figure. Natural athleticism and superb reflexes made him a magnificent fieldsman – close to the wicket he was freakish, taking hard drives cleanly. Reputed never to drop catches, he took five in one innings of a South African Test. With a low grip and crouching stance, he batted aggressively; his on-side play, with its driving and hooking, and his willingness to loft the ball were features.

In Sheffield Shield matches he made 6148 runs (average 43.6), and in all first-class matches 10,714 (37.5) with 27 centuries; his 19 Tests produced only 706 runs at 23.5. His Test inconsistency puzzled many, while others pointed to weaknesses in technique, however he played in all five Test matches of the 1932/33 ‘bodyline’ series, where his fearless approach was highly valued. He (83) and Bill Woodfull (67) shared an opening stand of 133 in the fourth Test in Brisbane. As a captain he was demanding, respected, sometimes unorthodox, though his team in South Africa won four of the five Tests.

His highest innings was 231 for South Australia, against Percy Chapman’s Marylebone Cricket Club team in Adelaide 1928; he reached three figures twice in a Sheffield Shield game against New South Wales in Sydney 1924 and failed by only four runs to repeat the feat off the Queensland bowling in Brisbane 1930.

In his league football career (1915 to 1927), Richardson played in premiership teams and was Sturt and South Australian captain. Usually at centre or centre half-back, he was a clever player and a fine kick and high mark. He was runner-up for the state’s premier award, the Magarey medal, and was later involved in football administration. His all-round sporting prowess, confirmed by an American Helms Athletic Foundation award in 1925, made him something of an idol.

Later, as a cricket broadcaster, he took part in Australian programmes relayed during Tests in England. His partnership with former England captain Arthur Gilligan was famous for its constant ‘What do you think, Arthur?’, ‘What do you think, Vic?’ In the 1950s Richardson was sporting editor of radio 5AD, then returned to the Australian Broadcasting Commission for sporting commentaries on radio and television.

He was commemorated in the naming of the Victor Richardson Gates at Adelaide Oval. His grandchildren include Ian, Gregory and Trevor Chappell. He was made an Officer of the Order of the British Empire (OBE) in 1954 as President of the Country Carnival Cricket Association.