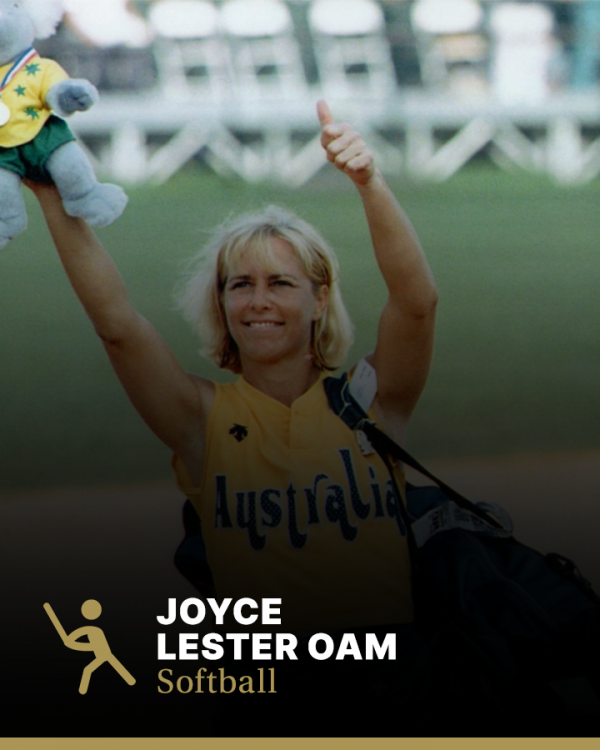 Representing Australia in softball from 1977 to 1996, Joyce Lester is recognised as an icon of the sport.

Her performance as captain of the Australian team at the 1986 World Championships was outstanding with a batting average of .313 (in the top ten at the championship) and a perfect fielding average of 1000. This performance saw Lester recognised as the best catcher at the championship and gained her selection into the World All Star team. Lester also won All Star honors following the Intercontinental Cup in Italy in 1989.

Lester recovered from serious abdominal surgery in 1992 to regain her fitness and take her place in the silver medal winning team at the Challenger Cup in Beijing. Australia lost to the USA in the final in a performance that was described as the best performance by an Australian team in nearly 30 years. In April 1993, she led the team to a 3-1 series win over New Zealand, then ranked number two in the world.

A highlight of Lester’s career was at the 1996 Atlanta Olympics where Australia won bronze. This was the first time that softball had been included in the line up of Games events. This was Lester’s final international competition, announcing her retirement at the conclusion of the Games.

More recently, Lester is a successful regional Queensland coach, coaching part-time in the Queensland Academy of Sport Softball Program. The aim of this program is to develop athletes for national teams at the Under 19, Under 23, and senior level. Lester was involved in the 2004 Olympics as a softball commentator.

Lester commanded the respect of players and supporters of softball throughout Australia through the high level of skill continually displayed, the competitive approach adopted, her knowledge of the tactics of play, and her leadership and sportsmanship. She is a role model for all youngsters in the sport who will endeavour to emulate her achievements.