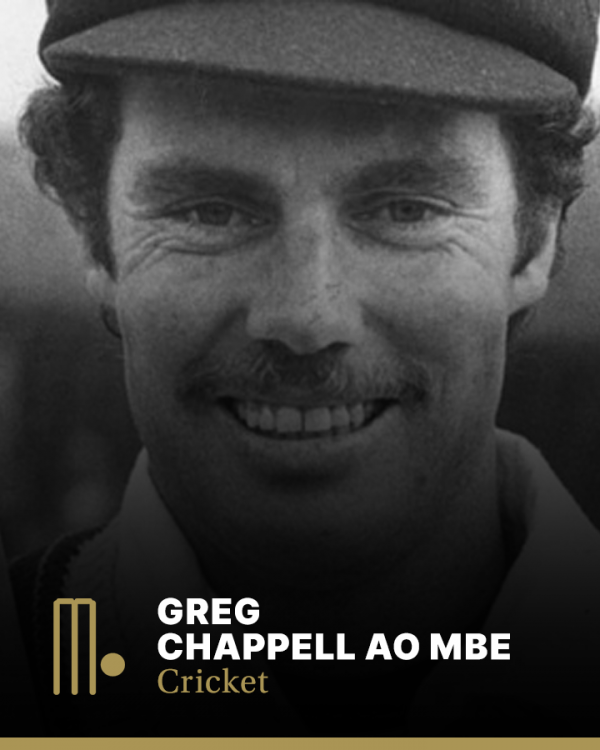 Indisputably one of Australia’s most accomplished cricketers, Greg Chappell also was one of the game’s great stylists. Tall, slim and athletic, his upright method and natural elegance gave an impression of ease in all aspects of cricket, whether batting, bowling or fielding.

The second of three brothers to play for Australia, Chappell had a distinguished sporting pedigree. His maternal grandfather, Victor Richardson, regarded as South Australia’s greatest all-round sportsman, played 19 Tests for Australia between the wars and captained the successful 1935/36 side to South Africa. His father, Martin, was prominent in Adelaide grade cricket and baseball.

Greg Chappell’s class was apparent from his very first appearance for South Australia in November 1966, when he hit twin half-centuries against Victoria as an 18 year-old. His maiden century followed later in the season. Two years of Sheffield Shield competition, augmented by successive winters in English county cricket with Somerset, broadened his experience. He was playing for Somerset when his elder brother Ian was scoring centuries for the 1968 Australian team in England.

When Chappell made his Test debut, against England in Perth in the 1970/71 Ashes series, Australia was on the ropes at 5/107. His sixth wicket association with Ian Redpath produced 219 match-saving runs, Chappell’s share being 108 from 218 balls.

Chappell added further lustre to his reputation during the 1972 series in England. His 131 at Lord’s in the second Test complemented Bob Massie’s 16 wickets in the Australian victory and was acclaimed as one of the best innings ever played at cricket’s headquarters. In the fifth Test at The Oval, he scored 113 and shared a third-wicket stand of 201 with his brother Ian. Significantly, these two centuries coincided with Australia’s only wins, squaring the series on each occasion from a one-down situation.

Chappell succeeded his brother Ian as Australian captain for the 1975/76 series against the West Indies, becoming the first player to hit a century in each innings (123 and 109 not out) in his first Test at the helm. Australia comprehensively won by eight wickets and took the series 5-1. It came as no surprise when he was named as the 1976 Australian Sportsman of the Year.

In March 1977, Chappell led Australia to victory against England at the MCG in the historic Centenary Test, incredibly by the same winning margin of 45 runs as in the first Test 100 years before. Three years later he was again Australian captain in a Centenary Test against England at Lord’s, to celebrate 100 years of Test cricket in England. This time there was no repetition of history, the match being drawn.

The World Series Cricket incursion of 1977, with its associated acrimony, brought a two-year hiatus to Chappell’s Test career. Along with most of the world’s leading players, he signed with the private promoter, on the principle of fairer financial rewards for international cricketers. Chappell made 14 “Supertest” appearances in World Series Cricket colours, producing 1416 runs at an average of 54.

During the 1980/81 one-day series with New Zealand in 1981, an incident occurred that he subsequently regretted deeply. In the deciding third final at the MCG, in front of nearly 53,000 spectators, New Zealand needed six runs from the last ball to tie the match. Chappell, leading Australia, instructed his younger brother Trevor to deliver the final ball underarm, to ensure his team won and to deprive New Zealand batsman Brian McKechnie, a renowned big-hitter, of the opportunity to attempt the six required. McKechnie blocked it, threw away his bat in disgust and left the ground. The incident caused much rancour on both sides of the Tasman and to this day, remains one of the most controversial moments in Australian cricket.

The 1983/84 season brought Chappell’s distinguished career to a close. At the beginning of the five-Test series against Pakistan, it was anticipated that he would exceed the 251 runs required to overtake Sir Donald Bradman’s Test aggregate record of 6,996. At the beginning of the fifth Test, during which he announced his retirement, he still needed 87. He scored 182 achieving a final aggregate of 7110, ending his Test career as it had begun – with a century. Greg became the first Test cricketer in history to score a century in his first and last Test innings. Altogether Chappell scored 7110 Test runs at an average of 53.6 in 87 Tests. As captain, he won 21 of his 48 Tests and lost only 13.

At his retirement, Greg held the record for Australia for the most runs (380) scored in a single Test match. His total of four double centuries in Test cricket is second only behind Sir Donald Bradman, for Australia, and he is the only Australian batsman since the Second World War to have scored a century before lunch in a Test match. He was the only Australian to score a century in each innings of a Test match on two occasions and the only Test captain to make a century in each innings of his first Test as captain.

In 1973 Greg was the Wisden Cricketer of the Year and in 2000 Greg was named in the Australian Test Team of the Century. Greg was inducted into the Australian Cricket Hall of Fame in 2002.

In retirement, Greg has continued his involvement with the game in a number of roles. At various times he has been a member of the Australian Cricket Board, a national selector, television and radio commentator and, most recently, the South Australian coach. He was made a Member of the British Empire (MBE) for his services to cricket.

In 2021 Greg was made an Officer of the Order of Australia (AO) for distinguished service to cricket as a leading player, captain, coach and administrator at the elite level, and to a range of charitable organisations.