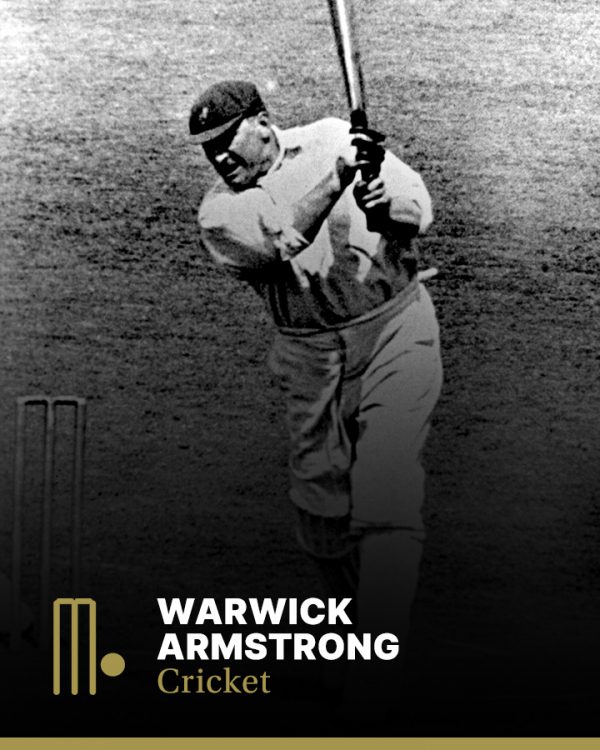 Warwick Armstrong was a huge figure in Australian cricket, both literally and metaphorically. Known as the ‘Big Ship’ on account of his sheer physical size, the larger than life Armstrong gained dual reputations as a brilliantly enigmatic all-rounder and a player who flouted officialdom throughout his career. He was generally placed alongside Monty Noble as the finest Australian all-rounder of the first twenty years of the 20th century.

Armstrong played two seasons of Australian rules football for South Melbourne in the Victorian Football League in 1899 and 1900 before taking cricket seriously. His early cricket career included being a ground bowler for Melbourne Cricket Club members practising in the nets at the Melbourne Cricket Ground.

After making his debut for Victoria in 1898/99, the name that he made for himself on the field of play was as a forceful batsman, tidy legspin bowler, and ultimately one of Australia’s finest ever captains. Following a string of consistent performances for Victoria, he was selected to represent the national team for the first time in 1901/02 and made an immediate impact, joining with Reg Duff to register the first ever century partnership for the last wicket in a Test match. Armstrong headed the Australian Test averages on his first trip to England, scoring 1087 runs, average 26 and taking 81 wickets at 17.50 runs each. He surpassed these efforts on his second trip to England, making 2002 runs, average 48.82, and taking 130 wickets at 17.60 apiece, being top of both averages. These figures constituted a record at the time, no other visitor to England had scored 2000 runs and taken 100 wickets in a season. Not quite so successful in 1909, he scored 1480 runs, average 46.39, and claimed 126 wickets at 16.23, but was still second in each list and by far the most effective bowler.

Such was the extent of Armstrong’s success in the Test arena that his hold on a berth in the Australian side was only disrupted by his decision to decline to tour England in 1912 as a protest. He was one of the `Big Six’ who stood out of the tour on the principle that the Board of Control had broken its word about a player-appointed manager and player control of tour finances. Even after such a defiant act, Armstrong remained highly regarded, however, and was not only re-included in the side for Australia’s very next Test match but was also promoted to the position of captain, guiding the team to eight straight Test wins before closing with two draws.

Armstrong was sacked as captain of Victoria in the middle of the 1920/21 season because he did not attend a practice season, as part of the continuing hangover from 1912. This event caused an enormous uproar in the cricket public, and made a national hero of Armstrong. Eight thousand spectators left the MCG to attend a protest meeting.

On the trip to England in 1921 for the first Test series since the War, Armstrong tried to keep his weight within 20 stone by stoking the ship for two hours a day. He failed, clocking into the tour at 22 stone.

He captained the 1921 Ashes side with such marked success he ranked third in batting and top of the bowling. With 1405 runs, average 43.90, and 106 wickets, average 14.56, he for the third time accomplished the cricketer’s double, equalling the record for any Australian in England established by George Giffen 25 years before.

During this Test, Armstrong became one of the two cricketers to bowl two consecutive overs in the same innings in a Test match (the only other recorded instance is Alex Moir). This occurred when the English team declared their innings. The rule at the time did not allow a declaration on the first day less than hundred minutes before the close of play. Armstrong had bowled the last over before the break. On recommencement of play shortly after, he bowled an over without anyone apparently noticing that he had also bowled the previous one. Towards the end of the fifth Test, with no result possible and Australia having retained the Ashes 3-0, each time before the end of the third day. Armstrong placed himself in the outfield, where he picked up a windblown piece of newspaper and began reading it. Asked why, he grinned and said: “To see who we were playing”.

Armstrong continued to play first class cricket until the end of the 1922 season in Australia, and for Melbourne until 1927.

Armstrong established a record by playing in 42 Test matches against England — one more than Clem Hill. In these games he scored 2172 runs, average 35.03, and took 74 wickets at an average cost of 30.91. He made four Test centuries against England — all in Australia — and in ten Tests with South Africa he twice reached three figures. Altogether 46 centuries stand to his name in first-class cricket.

Appearing ungainly at the wicket because of bent knees, almost inevitable in the case of such a big man, Armstrong was a splendid stroke player, with the drive and cut most in evidence, and his defence was untiring. Bowling slows, usually round the wicket from a great height, he did not turn the ball a lot.

Overall, Armstrong participated in 269 first-class matches, scored 16,158 runs at 46.83 and captured 832 wickets at 19.71. He also played in 50 Tests over a period that spanned close to two decades in total. In Sheffield Shield matches Armstrong scored 4993 runs, average 49.93, and took 177 wickets at 24.16 runs apiece. In Melbourne in November 1920 he made two centuries for Victoria against South Australia — 157 not out and 245. In November 1912, in the corresponding match, also at Melbourne, he scored 250, his highest innings in these tournaments.

Like many cricketers, after retiring from active participation in the game, Armstrong wrote for the press. A cantankerous man with strong opinions, he was inducted into the Australian Cricket Hall of Fame in 2000. As for his size, Ray Robinson observed: “No ball that Armstrong drove, and no deck-chair he sat on was ever the same again.”