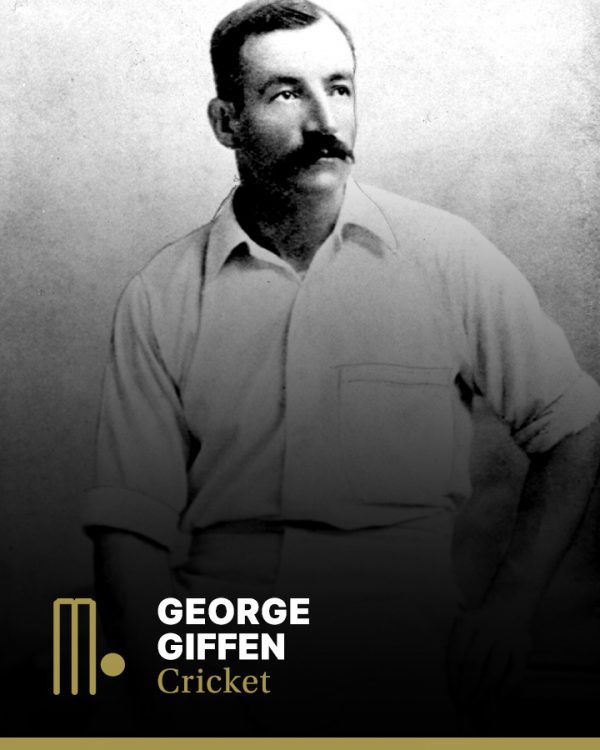 His first-class performances include many achievements. Nine times he scored a century and took 10 wickets in the one match. Twice he scored a century and took more than a dozen wickets. No other cricketer in the world has ever done this. He is the only bowler in the world to snare 16 wickets in a match five times and was the first to take 17 wickets in a match. In the winter of 1883, at the age of 24 in Sydney, for the Australian team against the Rest of Australia, Giffen took all ten wickets in an innings for 66 runs becoming the first bowler outside England to bowl a whole side out. He is also the first Australian to take 1000 first-class wickets and score 10,000 runs.

When batting he stooped a little but had a great variety of strokes with great freedom in his use of the bat, and was exceptionally strong when driving. He bowled right-hand, below medium-pace, with considerable spin and a well-concealed change of flight and pace. He used to send down with much effect a slow ball, very high-tossed, which, seeming to be coming well up to the batsman, pitched short, and resulted in many a caught and bowled.

Giffen performed well in English conditions. On each of his five tours he topped both the batting and bowling overall tour averages, yet another unique Giffen feat. The great all rounder led Australia in four of the five Tests during the 1894 tour. His 34 Test wickets was a series record at that time and he also scored the most runs for that series.

He had his greatest success as a bowler in England during the season of 1886, when 16 Derbyshire wickets fell to him for 101 runs, and in five consecutive innings he dismissed forty batsmen at a cost of 222 runs. He made a hat trick three times – for South Australia in 1887/88, against Lancashire in Manchester 1884, and against an England eleven, at Wembley Park, in 1896.

Giffen first visited England in 1882 as a member of the team that beat England at the Oval by seven runs. As the side included Spofforth, Boyle, Garrett, and Palmer – four of the finest bowlers of the time – Giffen was overshadowed, and while they averaged l50 wickets at a cost of less than 13 runs each, he had to be content with taking 32 wickets for 22 runs each. Still, he had great success against the Englishmen at the Oval, where he took 11 wickets for less than ten runs each – eight in the first innings for 49 runs – and contributed largely to a memorable triumph.

Most remarkable of all, perhaps, was his all-round performance in scoring 161 out of a total of 586, and 41 in a total of 166 for Australia against Stoddart’s team in Sydney in December, 1894. He took eight wickets, yet was on the losing side. The bowling of Peel and Briggs on a ruined pitch won the match for England by ten runs.

Giffen played his last Test in 1896 but remained a force at the first-class level for some time, at the age of 41 he captured 13 English wickets to steer South Australia to a victory over the tourists. Three years later he finished his career with scores of 81, 97 not out, and 15 wickets against Victoria.

Giffen was often accused of more than a sprinkling of favouratism, using his influence to try and help his brother Walter. Walter played Test cricket for Australia despite below average performances for South Australia and when George was named captain of the 1894 tour, Walter having made 11 runs in his three Tests to date and a poor domestic season was also named, many believing because of George’s influence over the selection.

In 1922/23 a match in Adelaide between South Australia and Victoria was played for his benefit, and the resulting sum, £2020, was vested in trustees. After being a Civil Servant in the General Post Office in Adelaide for 43 years, he retired in March 1925, thereafter finding the chief delight of his life, whilst health permitted, coaching in a purely honorary capacity.

He now has a grandstand at the Adelaide Oval named after him.