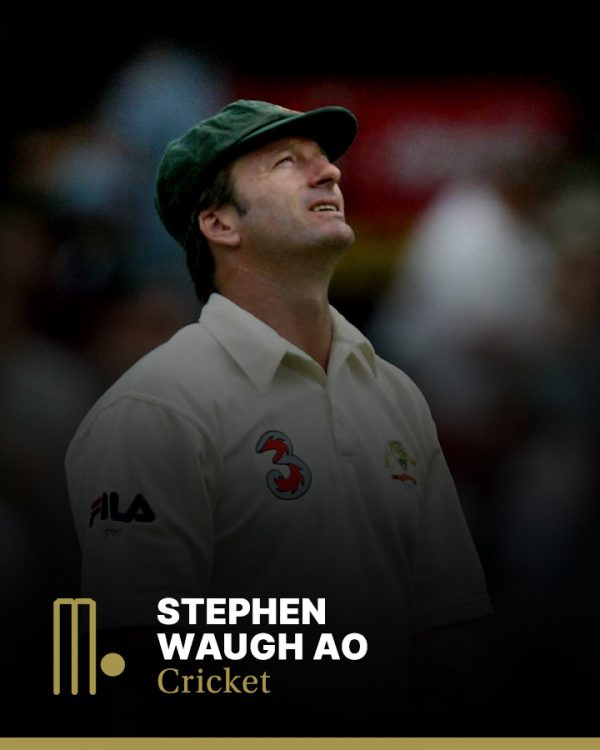 Steve Waugh AO was inducted into the Sport Australia Hall of Fame in 2007 as an Athlete Member for his contribution to the sport of cricket.

Waugh captained Australia’s Test team 57 times for a remarkable 41 victories. He scored 10,927 runs in 168 Tests and a further 7569 runs in one day internationals. Before a back injury caused him to abandon bowling, he took 98 Test and 195 ODI wickets.

Such success might have seemed almost predestined to those who saw him as a teenager, combining with twin brother Mark to form what was almost a two man team in under-age competitions in NSW, but those impressive final career figures tell as much about his strength of character as his talent.

Born in June 1965 he made his first class debut for NSW in December 1985, as an all-rounder, batting at nine and bowling medium pace. After only nine first class games he was selected for Australia, making his appearance against India in the second Test in Melbourne in 1986. It was his bowling (2/36) rather than batting (13 and five), which caught the eye.

His batting finally came into full flower in the Ashes series in England in 1989 when he scored centuries in the two opening tests and helped pave the way for Australia to regain the Ashes. It was in this series though that a back injury began to curtail his bowling. Though he would produce some impressive spells in the future, he would never again be a sustained front line bowler; he would need to rely on his batting.

Unfortunately, in the following years his batting form faltered and he was dropped from the Test side in 1991 (ironically to make way for his twin brother Mark, though he returned later in the series to join his brother as the first twins to bat together for Australia).

This setback revealed the steely determination which underlay his talent. Over the next few years he re-shaped his previously free-flowing game to become one of the most solid and dependable players in the game, and by 1995 he was rated the world’s best batsman.

He was appointed Captain of Australia’s One Day side for the 1997-8 season and in 1999 led Australia to a World Cup Victory. In 1999 he was appointed Test captain and led an Australian team which in the years ahead scored a record 16 successive victories.

In 2001 he won the Alan Border medal as Australia’s best cricketer. He retired in January 2004 at the end of the series against India.

In 2004 he was named Australian of the Year in recognition not just of his cricketing leadership but also his charity work, particularly with child lepers in India.